Black Mountain is located 11 miles due north of Mt. St. Helens in the extreme NW corner of Skamania County. Shielded by both distance and geography, it escaped the devastation of the 1980 eruption. The area around it remains a spectacular and untouched old growth paradise. The blast stopped two miles from the mountain and the results can be readily seen in this satellite photo taken in the early 1980’s. The red dot is Black Mt. Coldwater lake in the lower left corner of the photo.

I attempted this hike last October with Kelly Wagner and neither of us realized how difficult it was going to be. On that trip, we camped near the TH and though starting barely a half hour after sunrise, we simply didn’t have enough daylight to finish the job. That time, we got back to the TH about a half hour before sunset after nearly 10 hours of hiking and vowed to try again this year.

I was amazed at how beautiful this area was and wanted to get back and experience it again. I put the proposal to some of my off-trail and adventuresome hiking friends last February and both Bosterson and Acorn Woodpecker took the bait.

I could hardly have been happier since both these men have proven themselves to be among the best for both endurance and off-trail skills. The timing unfortunately did not work for Kelly so it was up to Nat, Ben and me.

This time, with a much longer period of daylight, we decided to drive up in the morning rather than camp at the TH. I estimated the trip would take from 10 to 12 hours max so it seemed reasonable. We rendezvoused at my place on the north side of Vancouver at 6 and headed out. 104 miles of driving later, we arrived at the TH at the end of road 2612 a little before 9 to clear weather and 51 degrees. We hit the trail at 9:07.

The rain a couple of days before had muddied up the trail and at least a couple of horses had churned it to a muddy mix that slowed us down some. The road apples didn’t help either but we managed to not step in the worst of it.

Admiring one of the three old bridges on the Green River Trail section.

The giant trees start about 1 1/4 mile from the TH.

The short bushwhack to the Green River had us soaked from the knees down from the foliage still wet from the rain a day or two before.

We crossed atop large logs jammed together. Another short bushwhack and we arrived at an unusually well-defined game trail.

After about a quarter mile of relatively flat terrain the game trail starts to climb steeply for another quarter mile. It then drops a short distance to an easy crossing of Falls Cr. After this, the trail climbs relentlessly, paralleling Falls Cr. Steep at times, the game trail is easily followed for the most part.

Falls Cr. is aptly named and three major - and steep apron-type falls make this a scenic and enjoyable route.

Though the game trails are good for the most part, they are not continuous so at times we had to forge through brush and young trees that shed voluminous water droplets on us soaking us thoroughly. We were putting out a lot of energy so keeping warm was not a problem, though it wasn’t the most satisfying of conditions.

I’d made it to Deer Lake before turning around last time but the rest was terra incognito.

Above the lake we found a series of almost continuous game trails up a seriously steep slope (over 2,000’/mile) and made the summit ridge a little before 3. At 4,700’ we found an excellent game trail traversing to the south leading to the summit ridge. We thought this would be the better route but hadn’t counted on two large rock fins between where we gained the ridge and the summit.

We navigated these big rock fins and finally got to the top an hour later. We nearly gave up, worrying about the time required to get across the second fin and then retrace our steps later. We persevered though, helped by Ben and Nat’s Spider Man powers. They both climbed those rocks like they do it all the time - oh, wait – they do!

The views were better from the first fin but the summit views were darn good too.

Short on time, we decided to descend directly down a chute we avoided on the way up and it wasn’t too bad. When the chute got too steep, we retreated a few dozen yards to the north of it and continued on down. I wished I’d taken my micro spikes though, I’ve found them to be very useful in steep, slippery terrain such as this. If I were to do this again, I’d go straight up from the lake along the path we went down thus avoiding the ridge and the rocks.

We made it back to the TH about 20 minutes past sunset and steeled ourselves for that nearly 3 hour drive home.

Nat and I got differing EG’s and distances for this adventure from our GPS's but it’s about 15 miles and at least 4,000’ EG. We all agree it seemed like much more.

Thanks go to Ben and Nat for their cheerful demeanor and great conversation on this very demanding adventure.
Last edited by Don Nelsen on August 9th, 2019, 2:50 pm, edited 2 times in total.
"Everything works in the planning stage".
Top

That was a great trip! Black Mountain was well-earned, and surprisingly difficult to access. I'm glad we persevered to get the summit, as the route back was so much quicker (easier to follow the elk trail going down), that we would've been super bummed had we actually turned back so close to the top. Thanks for putting this together and guiding us up there, DN! Here are some of my pics:

The legend next to a big tree 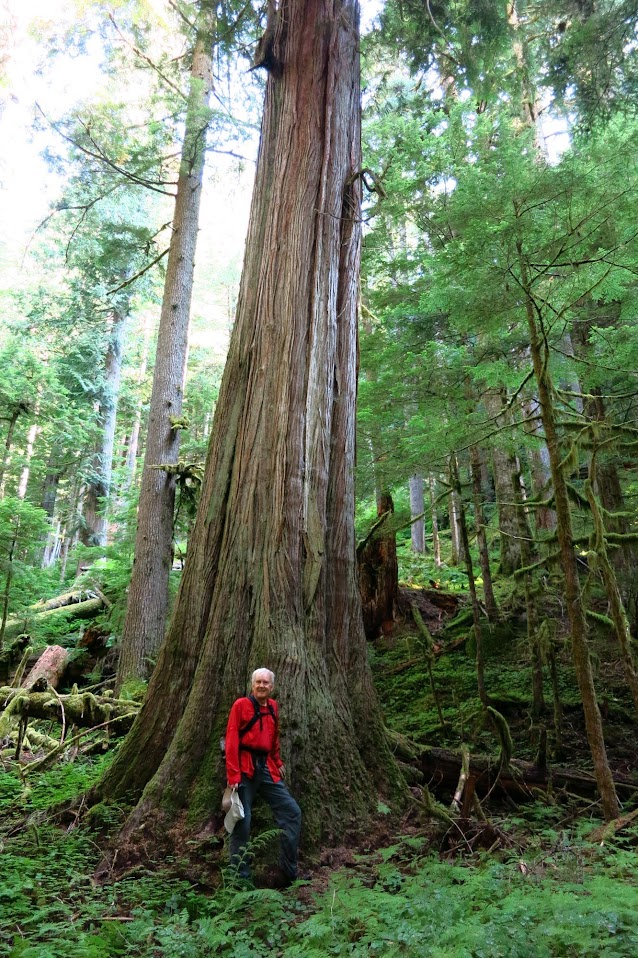 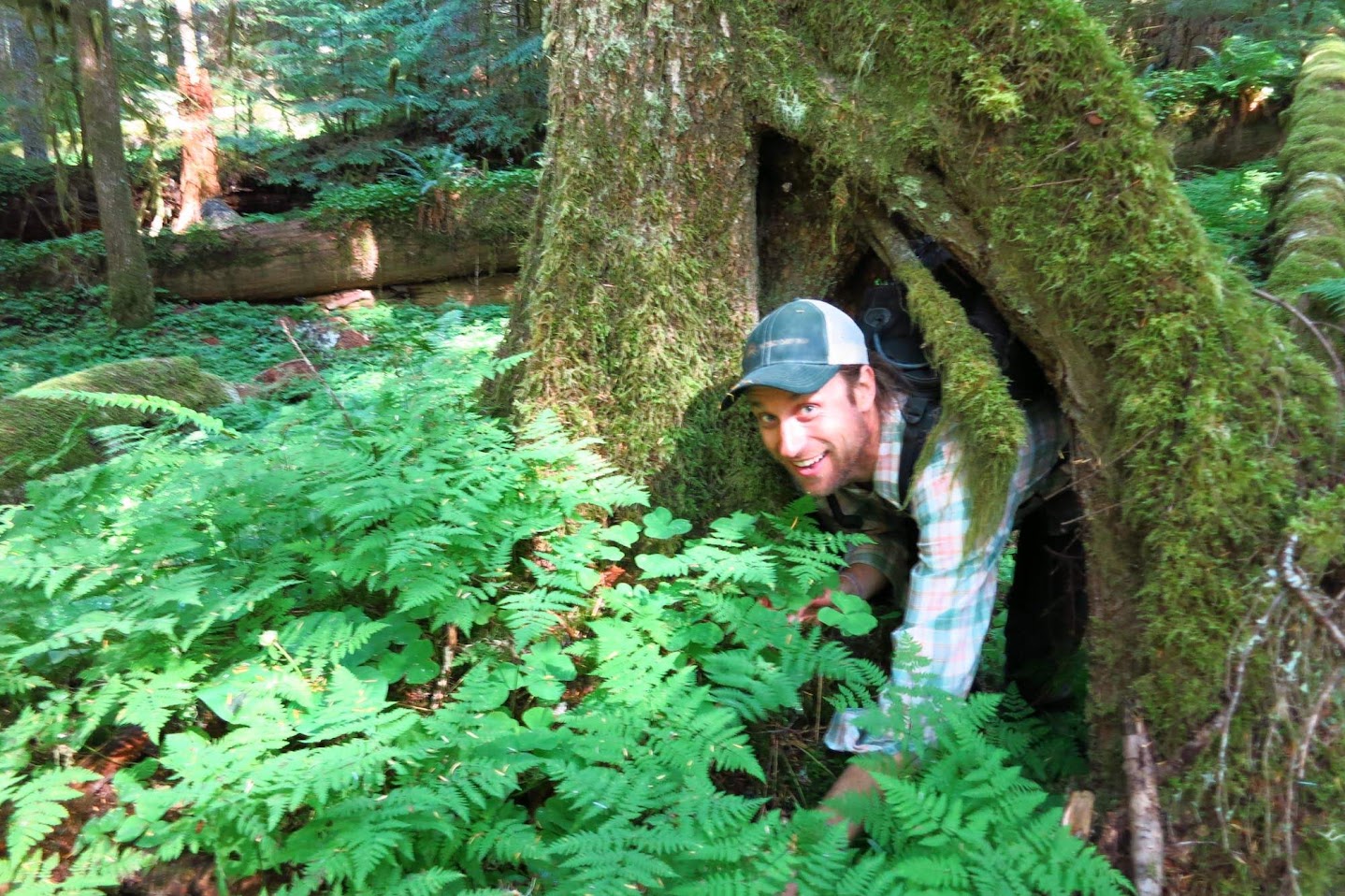 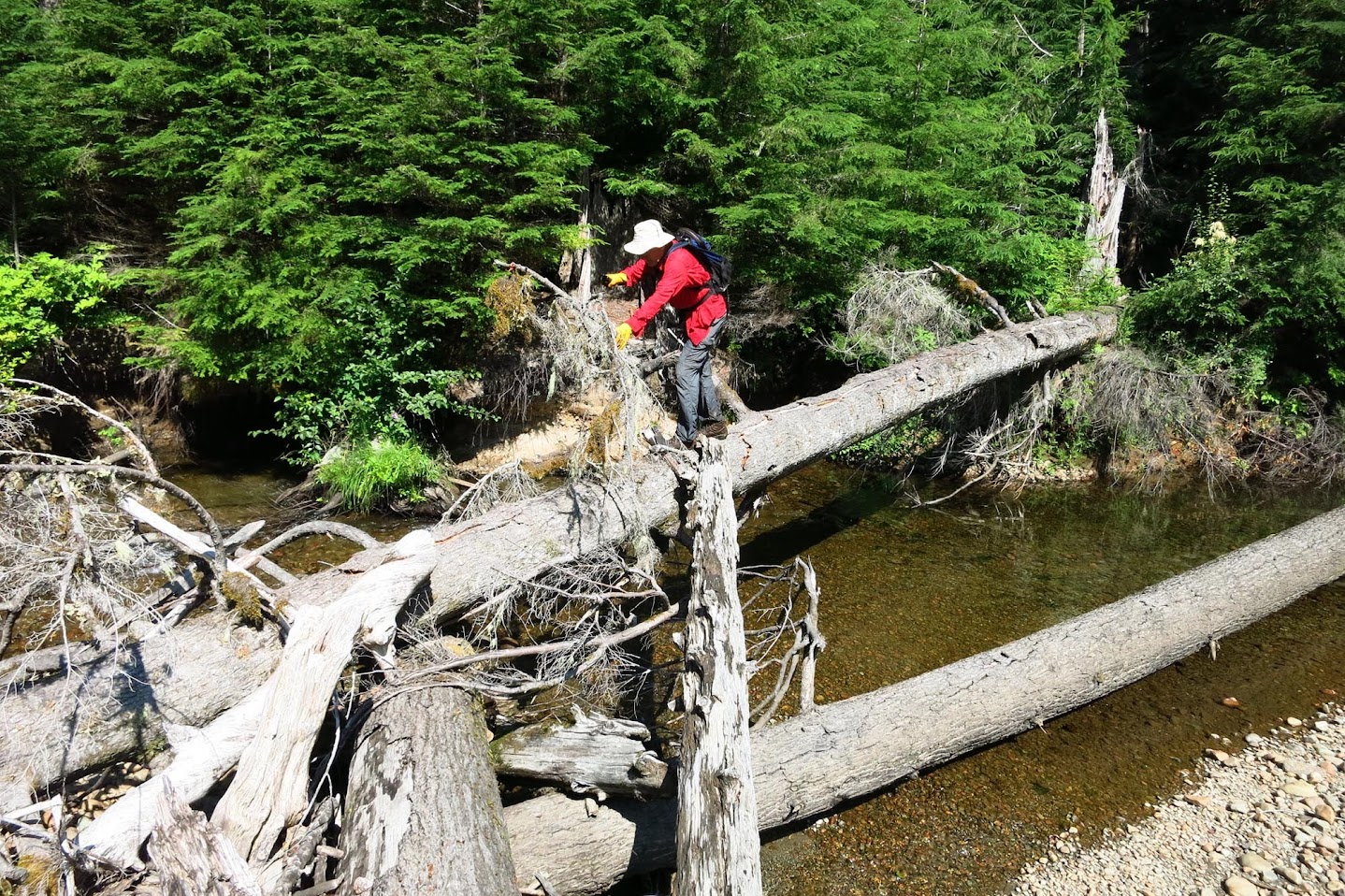 Shockingly, this is a game trail! 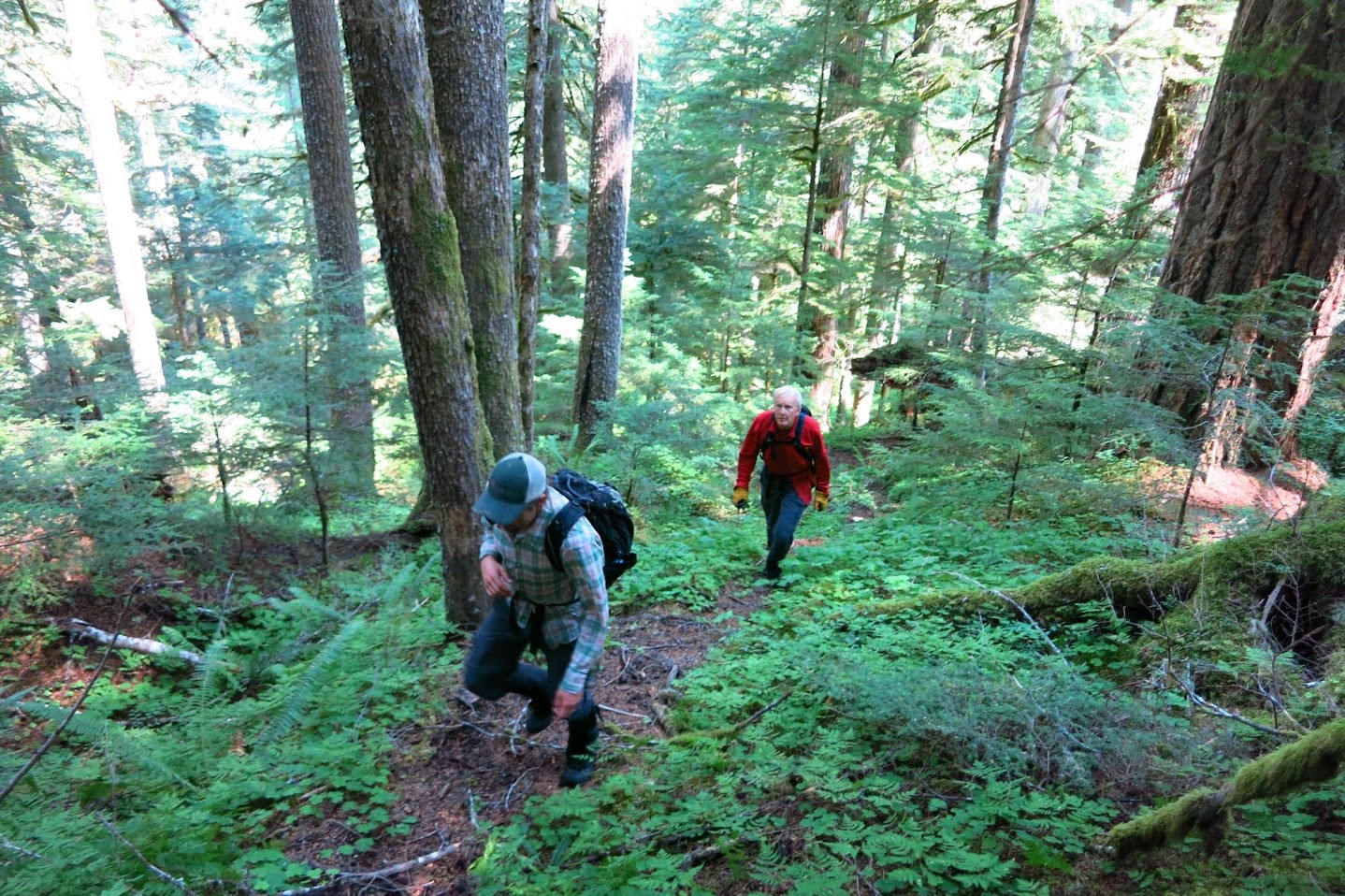 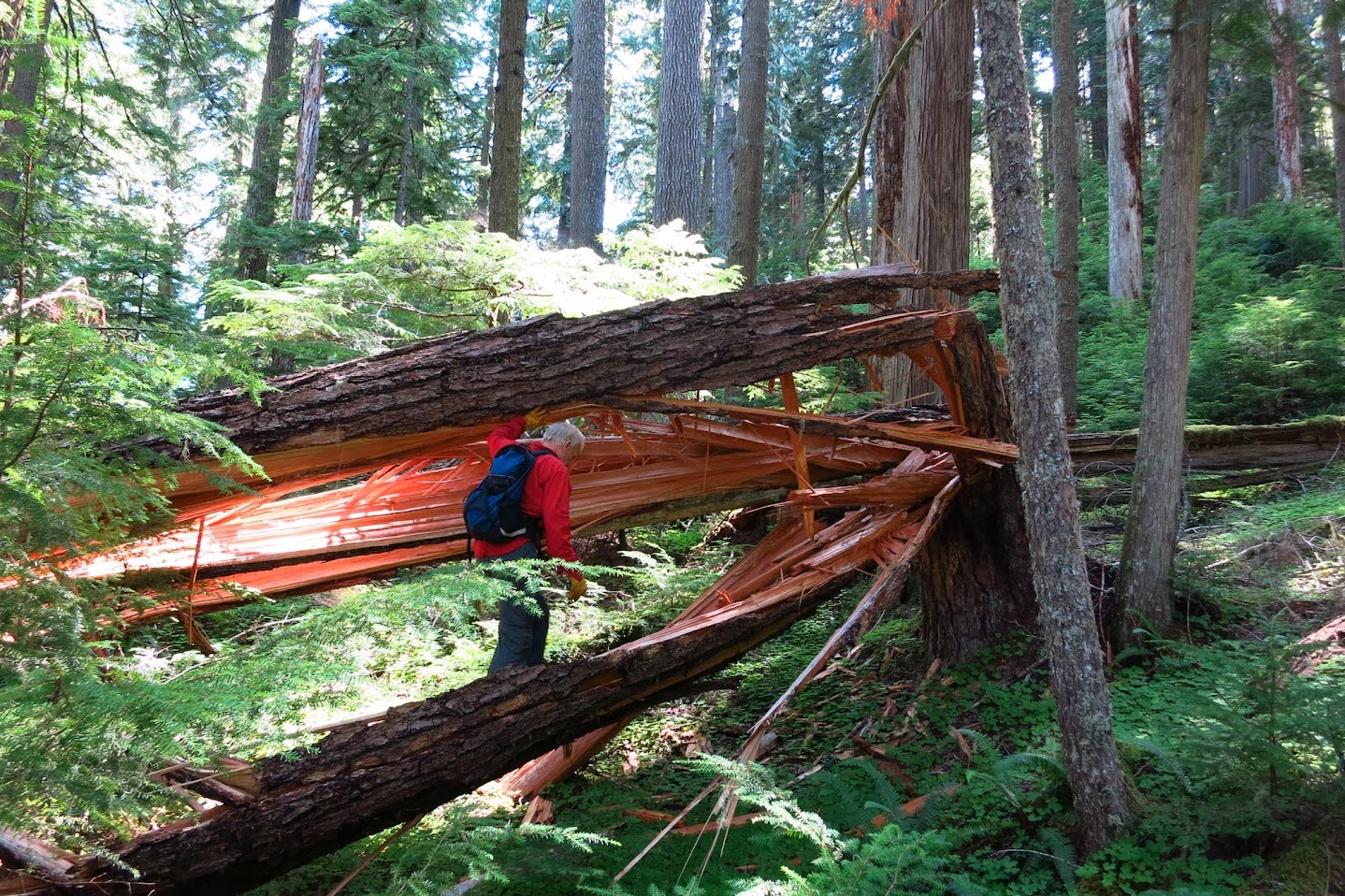 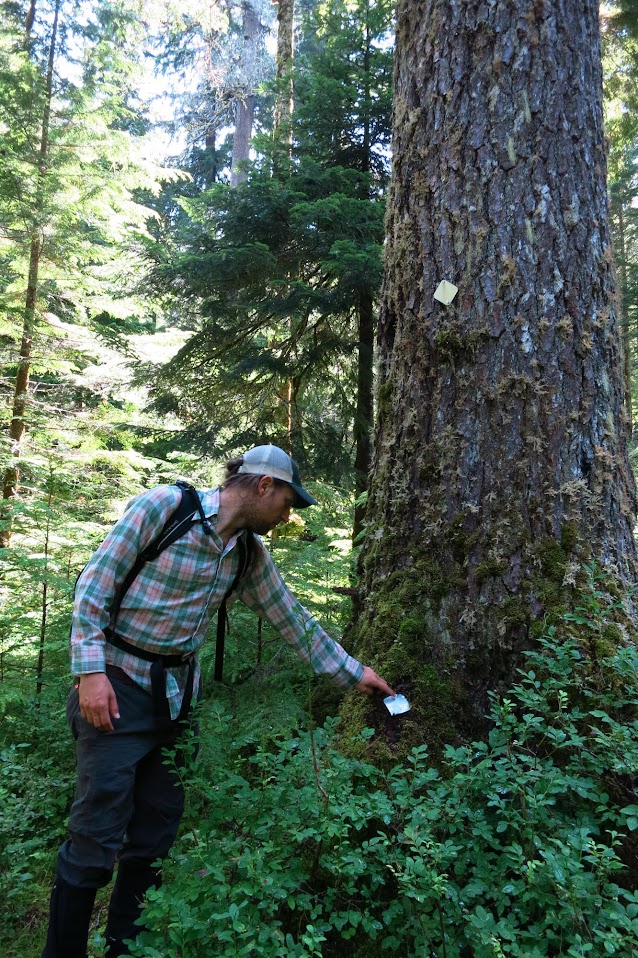 Checking out one of the big slab waterfalls on Falls Creek 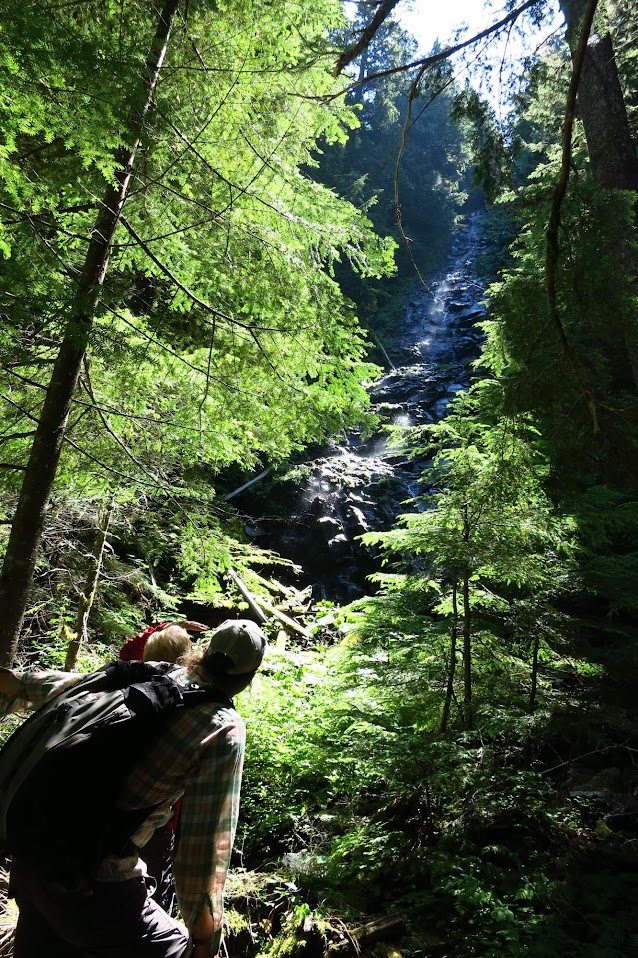 On the S ridge of the mountain, at the first rock step 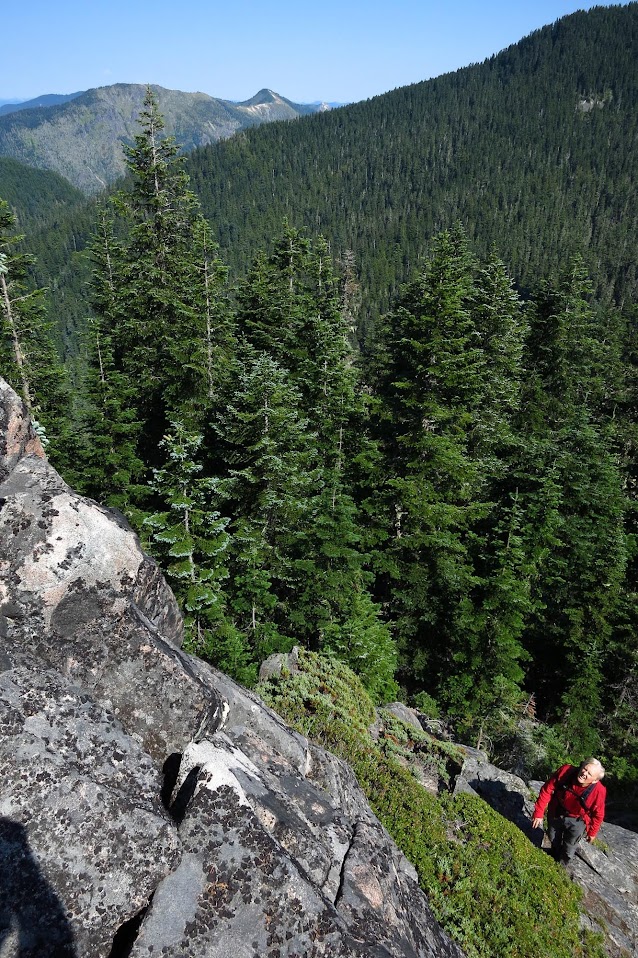 DN in his element 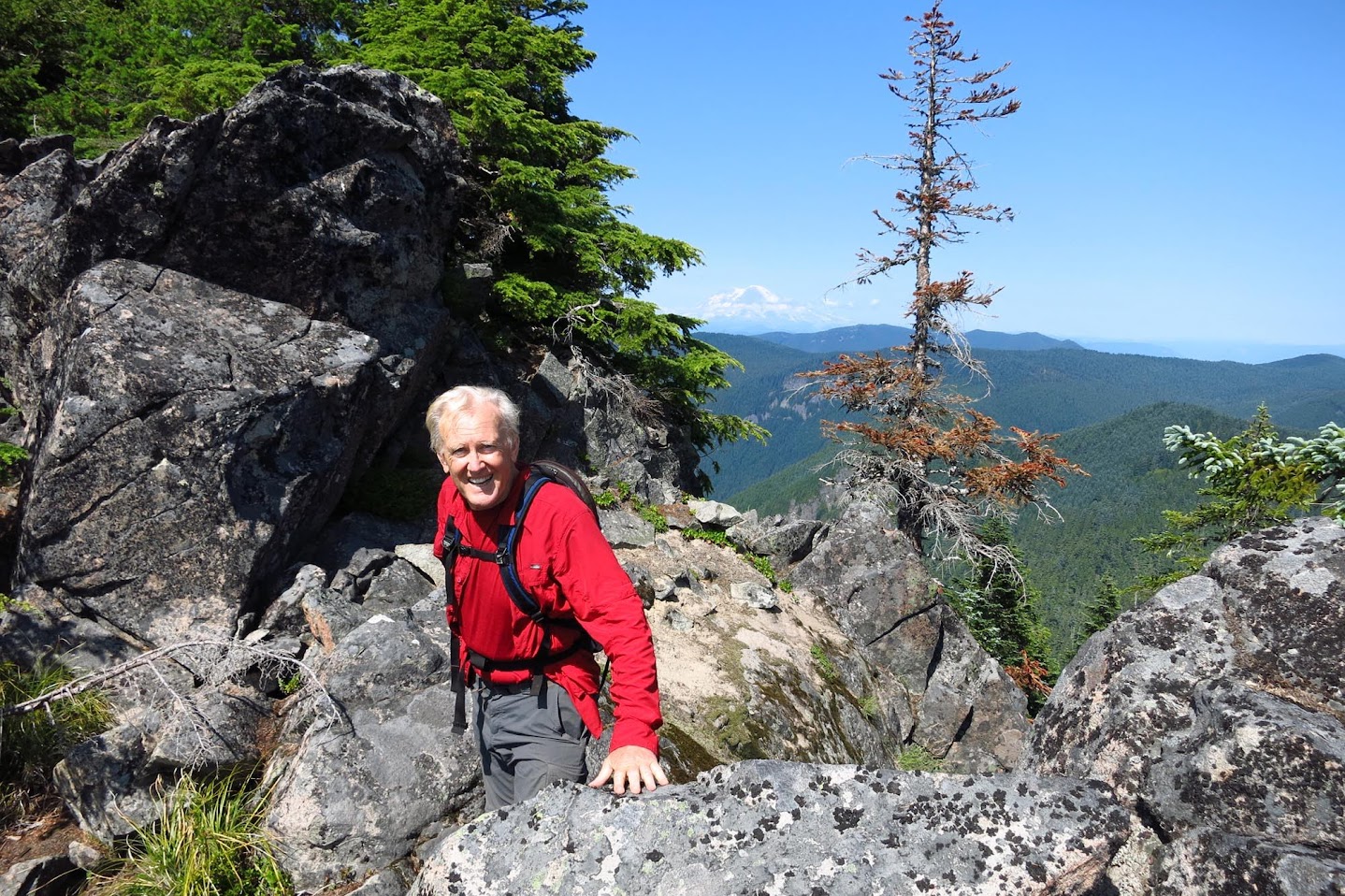 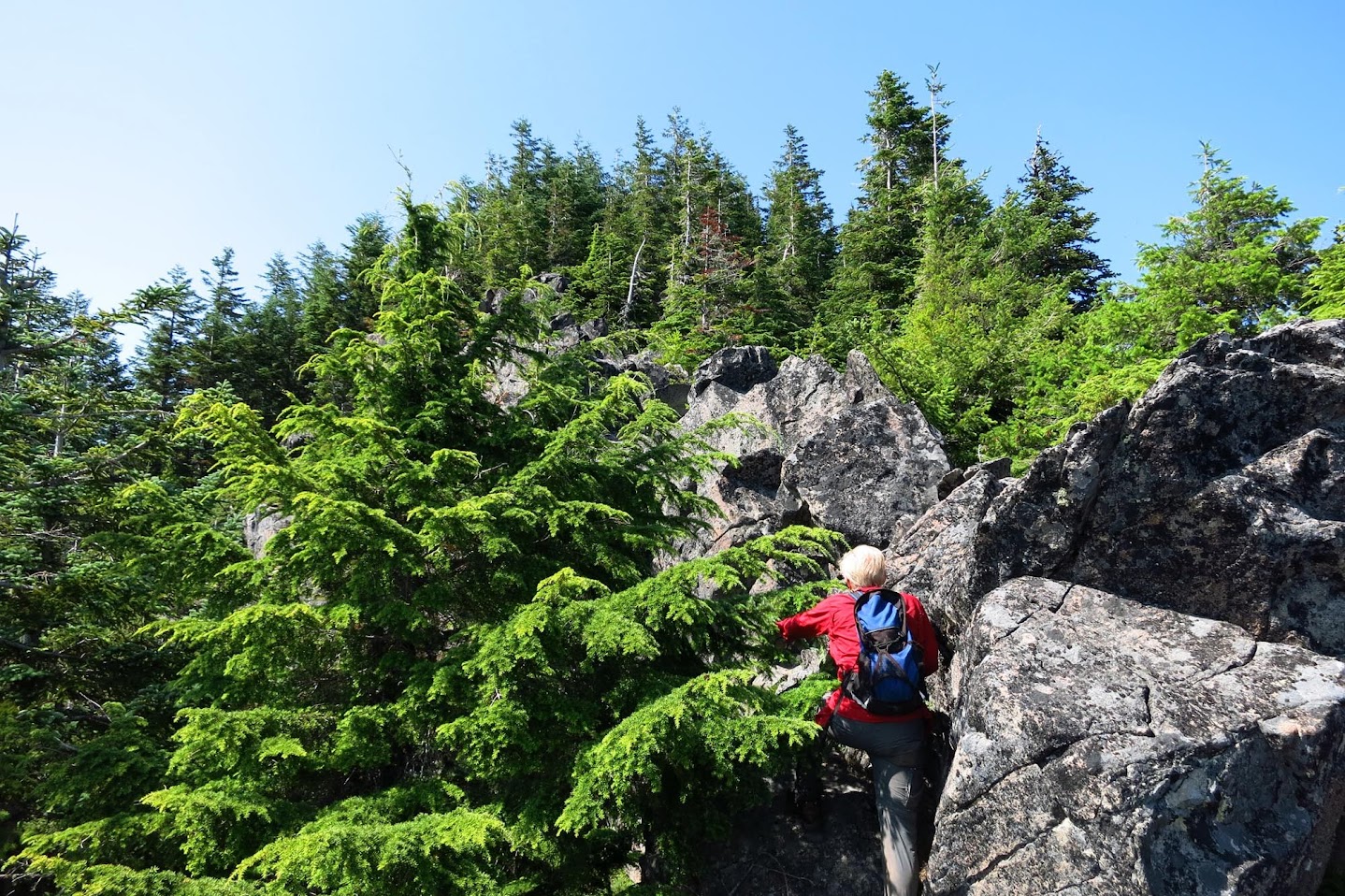 Where we decided keeping to the ridgecrest would be too time consuming, and were preparing to give up 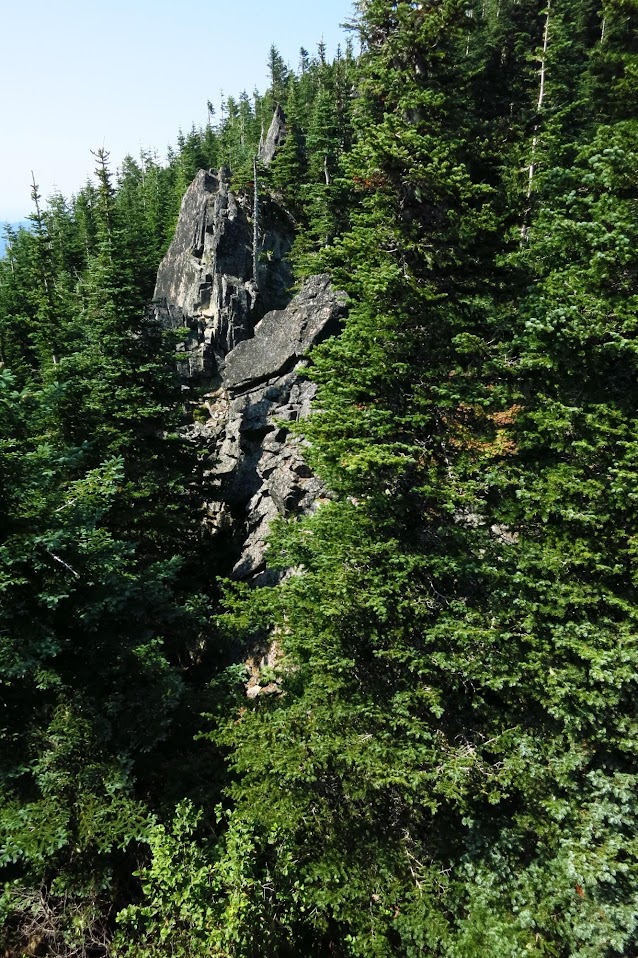 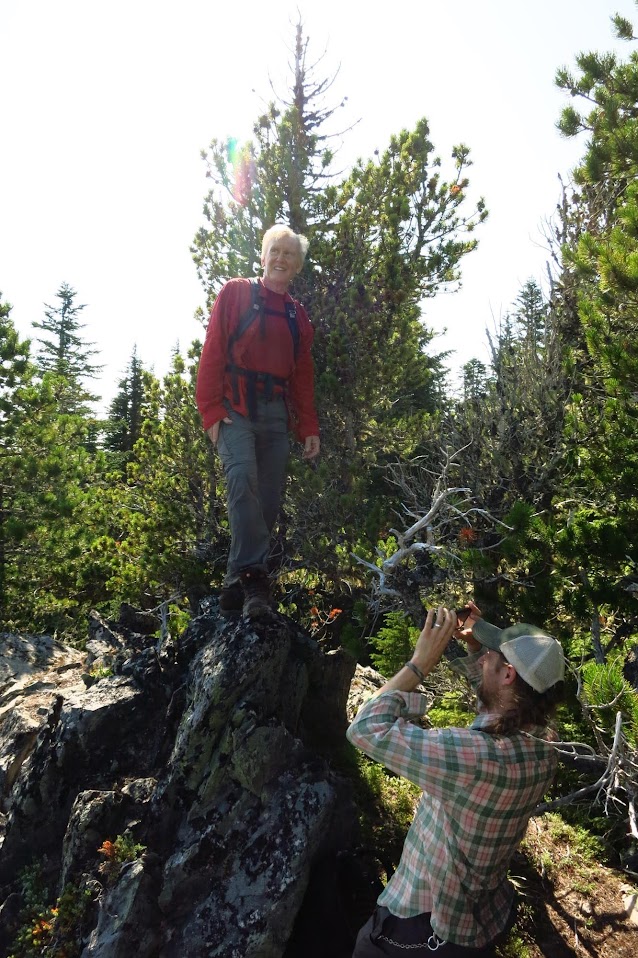 Back down at Deer Lake, later in the day with great light 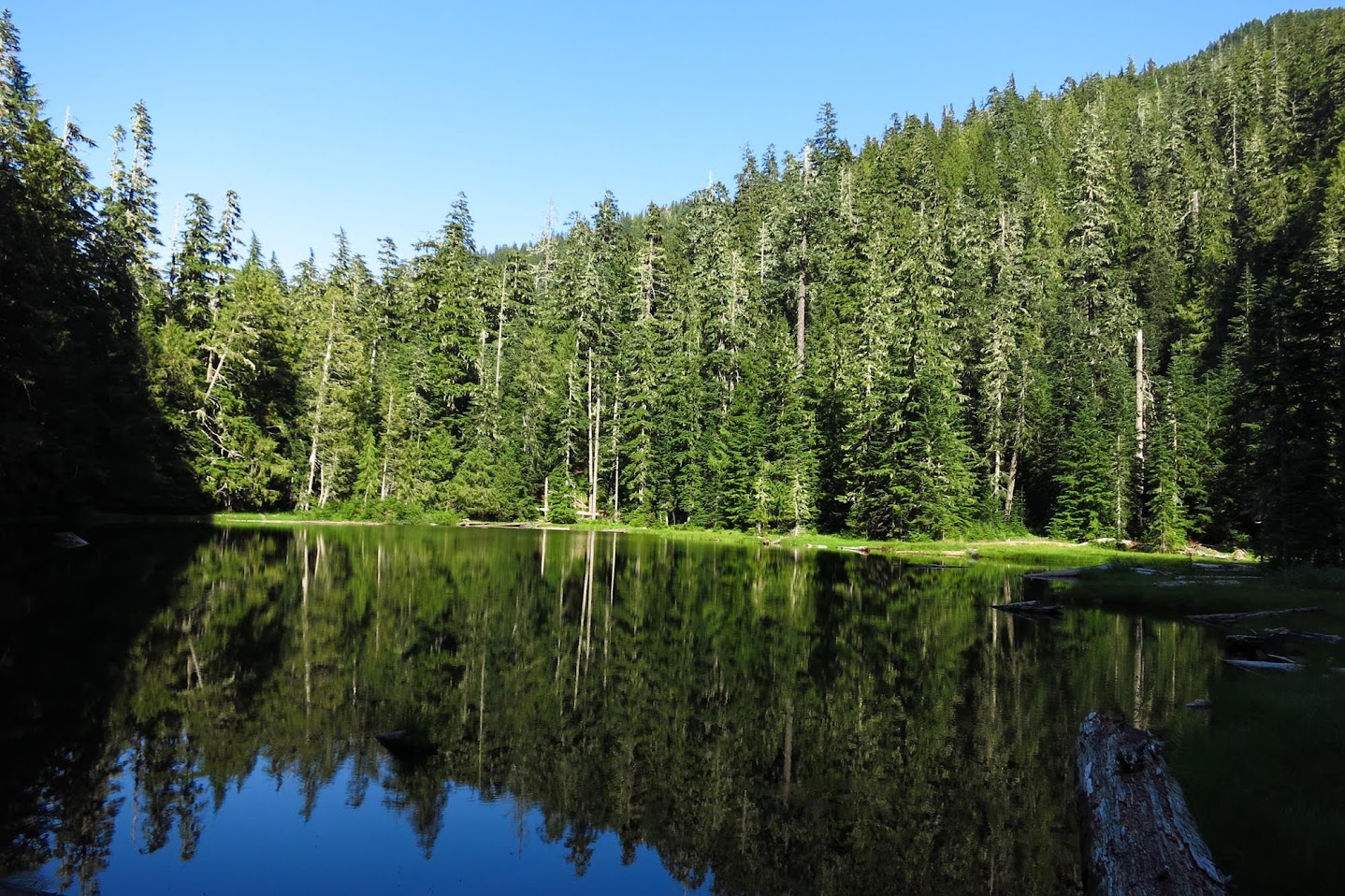 Top of one of the slab waterfalls That big falls on Falls Creek from earlier in the day, under better light

Boy, now you know that I just have to do this! Congratulations to the 3 of you. Probably a good thing I wasn't part of this expedition, who knows when we would have finally made it back to the cars, & I hate hiking those first / last miles in the dark. For some reason, that section of forest gives me the creeps, even in the day light.

Ha! They were very forgiving of this "old geezer" allowing me to at least stay in sight of them on the up-climb. On the return, on the trail, I led most of the way and they seemed fine with that - but then, I had the car keys!

Seems like I haven't seen a DN TR in a while. Have wondered what you've been up to.

If it took you guys 11:44, I have to believe the vast majority of us would have a hard time doing that in a day (or maybe even two).

Nice game trails. If only we could train them to build trails where we want! But it's always a pleasant surprise when they show up unexpectedly.
Top

The elk in that area are particularly good at making trails (because there are so darned many of the critters!)
Here is a picture of one just a couple of miles away.

If it took you guys 11:44, I have to believe the vast majority of us would have a hard time doing that in a day (or maybe even two).

Nice game trails. If only we could train them to build trails where we want! But it's always a pleasant surprise when they show up unexpectedly.

Chip, thanks for the comment. I know I haven't posted much lately and it's partly laziness on my part and partly because I'm doing a lot of obscure hikes that I don't think most folks would be interested in. I'll put a few thing together as the summer winds down and I have more time.

We loved those game trails but as you say, if only we could train them...

dn
"Everything works in the planning stage".
Top
Post Reply
8 posts • Page 1 of 1