On the normal route to Defiance, I turned towards Starvation briefly (Starvation Ridge Trail eastbound), then left the trail where it crosses over Warren/Wonder Ridge at about 400', and headed up the ridgecrest. That was kinda cheating if I wanted to stay offtrail all the way, but the bottom 400' of Defiance from the Starvation TH would likely be a ridiculous miserable bushwhack, and I saw no point in subjecting myself to that.

I went up this way a couple summers ago, but it was my second hike of that day, so with limited time/energy, I gave up when the ridge faded out around 1600'. Today I discovered the ridge gets crisp again just a little higher. Naturally, wish I had been more persistent on that previous hike. Continued to follow the crest up, saw some cables, then crossed an abandoned road, as I knew I would (just shy of 2000'). Continued up the crest, reached Defiance trail at 2500'. Crossed over to the west/Lindsey side, and continuing to the west I was surprised to find a ridge. Followed it up, then continued further west when the ridge faded.

Came to the slopes below cliffs at 4000', where the Defiance trail offers its first interesting views up/southwest. I've recently seen the name Lindsey Gap applied to this feature. I'd been nervous about this spot on my ascent. Figured it could turn out to be the crux of the hike. The traverse under the cliffs (on the west side, of course) wasn't too bad. A little steep and icy, but not too dangerous. Finally decided to climb up (east) to the top of the cliffs, and was rewarded with fantastic scenery. I was higher than I realized, open slopes, almost an alpine feel if you can ignore the trees. At the top of the open slopes, into the forest again, severe postholing, swimming uphill. Treewells up to my waist. Frequently hooked my axe onto trees to pull myself out. Painfully slow. Finally to the towers, then a little south to the benchmark summit. No footprints, all mine. Warm, calm, tee-shirt weather. 7 hrs up, 5.5 hrs down. I knew the second half of the ascent could be a lot faster than the first half if snow was firm, but nope, it went considerably slower.

West side of the Lindsey cliffs, almost to the top. Fun!

Top of the Lindsey cliffs.

I almost missed this. Just a random find.

Almost to the top of Defiance. Snow was about 4' deep.

I don't think that fence is keeping anybody out.

Back at the top of the Lindsey cliffs. Best part of the day. More scenic than the cramped summit, room to stroll around and enjoy the views.

Ugh, Wonder Ridge, the worst ridge in the Gorge. I would say that at least the copious poison oak would be dead now, but given the Juneuary we're having, that probably isn't the case.

Also, I hear the solution to postholing is snowshoes. 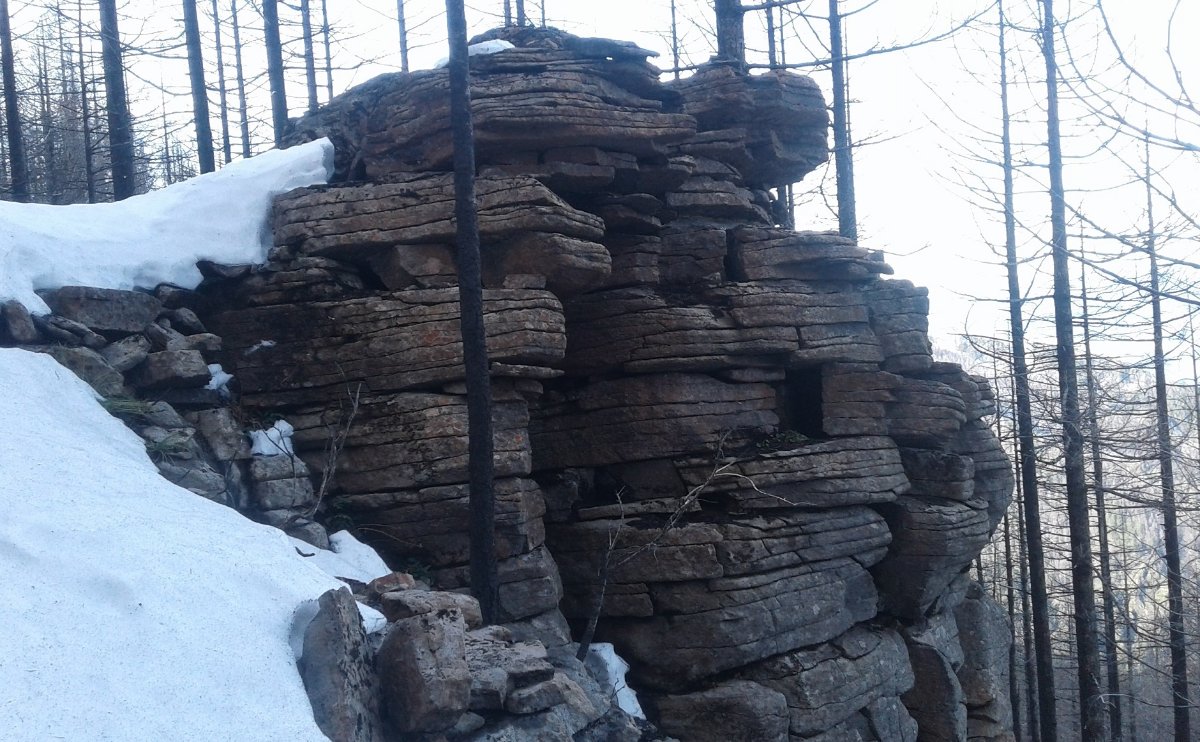 Hey, I thought about you the whole way up that ridge. Even considered claiming that I picked that route because you said it's fun.

Bonus pic below: a relic found on the ridge a little below the road crossing, maybe about 1900'.

There were quite a few geological curiosities west of Defiance trail in the neighborhood of 3k'. See map below. Nothing great, but enough to break up what I was expecting to be a featureless forest hike.

I hate snowshoes. Heavy, cumbersome, brush snaggers is what they are, better suited for hikers starting out at a snowpark. I would have used them for roughly the last 10% of elevation, maybe not at all on the descent. Last time I carried snowshoes, I only took them off my pack when I wanted something to sit on. Anyway, if it got so bad that I had to give up, I could have cut over to the packed trail.

Thanks for not making fun of my time.

Oh, and no, I didn't see our friend Mike.