That was my inclination, too. (Before this discussion; maybe not after?)

Maybe think of the Beatles and their bowl cuts?

Hmmm, a depression filled with white stuff?
Karl
Back on the trail, again...
Top

johnspeth wrote: ↑
October 31st, 2018, 5:58 am
It's the terminal location of the second crater rim trail that the FS recently decided to not build.

Can anyone clarify on this or provide a link. When you say second crater rim trail that they decided not to build, do you mean in addition to the south side monitor ridge or is that separate from the 'Crater Glacier View Climb' project they had developed a few years ago, given the reins to MSHI on and said that at some future point it might be open to the public like 'Monitor Ridge'.

This is the best I know of on that...

Which, if they know their landmarks any better than we do, would put SB at a height of about 6725', huh? Well below that peak 7681. Hmmm... (Chip, do you know about what elevation you topped out on that day?)
Karl
Back on the trail, again...
Top

What a fun discussion!

kepPNW wondered where I found a USFS indication of where SB is. From the Windy Pass TH, one can climb a long set of stairs to a viewpoint over Spirit Lake. There are some interpretive signs there, one of which unambiguously identifies SB as the dome I ascended (there's an artist's rendition of various notable features). Of course, that display might be inconsistent with other sources, but I'm confident I interpreted it correctly. But then, I had been drinking, so...

Water asked "What was it like being at the back of the dome?" It was, of course, really cool. But ya know, I can't say it was the most interesting part of the hike. BTW, I actually started up the lava dome, but thought better of it. In those days, it was pretty steep/high all the way around (as opposed to the current dome, where the south side seems to be pretty easy to walk up). I realized there was quite a time commitment to scramble up to the top, and I was worried something could go wrong along the way. As amazing as it would have been to stand on top of that dome, I've never regretted my decision. It was just too risky.

Bosterson knows what's essential, and asked about my DeStruisse. Yeah, it was fine, but nothing astonishing. I consider their flagship to be Pannepot. I was ecstatic when I recently scored a couple bottles of Pannepot Special Reserva, but I'm waiting until I can find the regular Pannepot so I can enjoy them juxtaposed.

kepPNW offered this quote: "U.S. Forest Service trail planners originally hoped to establish a route to the top of the Sugar Bowl, a rounded landmark on the northeast side of the volcano. But the Sugar Bowl ascent was too steep and loose, so the alternative goes to a saddle between the Sugar Bowl and Loowit Falls. At 5,225 feet elevation, the saddle is 1,500 feet lower than the top of the Sugar Bowl — but the unobstructed view of the crater is still remarkable."
Indeed, the SB I ascended was too steep and loose to be a sensible objective for most, without snow. I found it to be at the limit of my comfort range. Any steeper and I still would have done it, but it would have been unpleasant.

kepPNW asked about my elevations. I think I know where the 5225' saddle is, and indeed I show 5220', so that's confirmed. This is the saddle I described as "right of Sugar Bowl" in my TR. So SB should be 6725'. Let's see what my notes show. Wait, I'm showing 6300'. Drat, everything was adding up until now. Oh well. I really think that 1500' statement is wrong, but who knows. I take solace in the fact that I attained a very well-defined spot, and it's the next obvious goal above the saddle. On the off chance that I wasn't really on the top of SB, it doesn't matter that much. I'll probably get to that higher point, and Dogs Head, next spring. An afterthought: the news source above, which indicated SB is 6725, also described SB as "a rounded landmark on the northeast side of the volcano". That would be consistent with where I ended up, whereas the next obvious goal might be better described as "a prominence on the NE end of the crater rim".
Top

On that map, the Dog's Head is that clear area just to the left of the "D" in Dog's Head

Although it could easily be that Sugar Bowl was mis-identified on that map.

The main benefit I get from Jerry's map is that I finally understand why they call it Wishbone Glacier!
There's been some discussion that the modern Dogs Head isn't in the same place as the historic Dogs Head, but I don't know about that.
Top

Peak 8180 was just part of a slope pre eruption
Top

Found the 1958 USGS map here, which I think was reprinted for Jerry's 1968 example. It can be downloaded directly, too.

Love the observations on how "things have moved!" Jerry's got a keen eye, as Dog's head was "definitely" in section 3 pre-eruption. Nice spot on the old Wishbone Glacier shape, too.


Chip Down wrote: ↑
November 2nd, 2018, 5:24 pm
From the Windy Pass TH, one can climb a long set of stairs to a viewpoint over Spirit Lake. There are some interpretive signs there, one of which unambiguously identifies SB as the dome I ascended (there's an artist's rendition of various notable features). Of course, that display might be inconsistent with other sources, but I'm confident I interpreted it correctly. But then, I had been drinking, so...

I know that sign, and I agree with the interpretation! Heh... 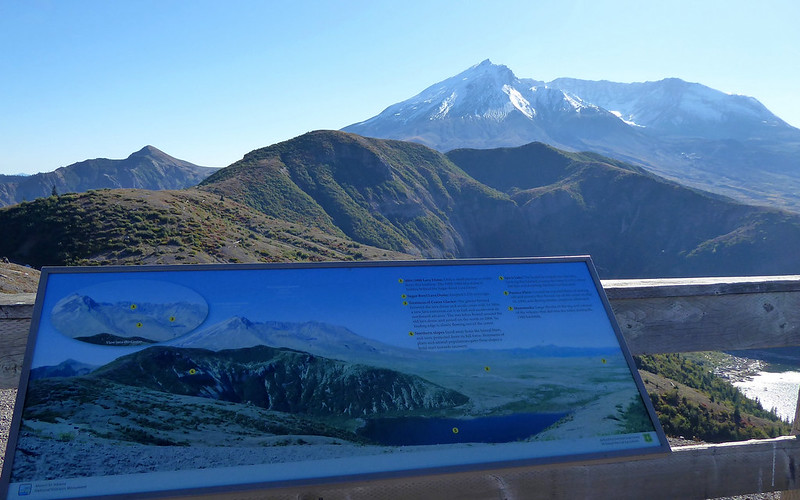 And also dug out another article for Matt...


The Daily News wrote: The Forest Service has mapped out a route from Loowit Trail No. 216 up to a saddle west of the Sugar Bowl. Earlier, a trail was considered to the Sugar Bowl, but Forest Service workers couldn’t find a safe location for it.
...
Romano said the Forest Service wants to know how search-and-rescue would be accomplished on the route before opening it up to the general public. Public climbing would likely be by permit only, similar to south side climb, she said.

These articles still chafe pretty bigtime. Clearly, the intent was to allow the public onto public lands, but that all got side-tracked somehow. I have heard some justification that the Volcano Rescue Team didn't want any part of it, but that could've just been scuttlebutt?
Karl
Back on the trail, again...
Top

kepPNW wrote: ↑
November 3rd, 2018, 4:05 am
Love the observations on how "things have moved!" Jerry's got a keen eye, as Dog's head was "definitely" in section 3 pre-eruption. Nice spot on the old Wishbone Glacier shape, too.

I'd like to stress kepPNW's comment. It's probable that the post-eruption map makers didn't want to rename features so they did their best to keep the set complete at the risk of being inaccurate. Those old maps are key to understanding it. Thanks for the old maps, folks.
Top

much better image than my picture of a paper map

the paper map say "based on USGS quadrangles with recreation data added by Forest Service".

it appears that the old Timberline campground was not part of the blast zone, I wonder if there's anything there? It could be covered with ash... 4300 feet elevation, about 3/4 mile from Windy Pass, between N and NW.
Top
Post Reply
26 posts