I haven't been to the north side of St Helens in a very long time. My main goal was to find Sugar Bowl, a feature between Plains of Abraham and Loowit Falls. I thought I might start around Windy Pass, but I wasn't really sure what to look for. Instead, I decided to take Loowit Trail CCW and just go sauntering past Loowit Creek, into virgin trail (for me). On the way, I noticed a striking big mound. Aha! I always assumed Sugar Bowl was, you know, a bowl, like other alpine bowls, a big round depression. But a sugar bowl sits on your kitchen table as a prominence. Sure enough, later I verified my mound was Sugar Bowl. Hmm...so should I go climb it? Stayed on trail for a while, partly to see it from other angles, and partly to enjoy the scenery as I pondered my options.

I lost the Loowit Trail in a gully (these things happen) and then went upslope to investigate an anomaly, and when I started back down to find the trail, I was surprised to see how far it was below me. To the west, I saw a higher trail, so aimed for that instead. I vaguely recalled seeing a spur trail mapped, so it could be that, or perhaps the Mt St Helens Institute "crater glacier view" route. I now realize they're the same, as MSHI describes the route as following the "short spur to Loowit Falls" and then continuing offtrail from there. So I got myself over to that trail and followed it up, but it became faint, so I was on my own. Aimed for a saddle right of Sugar Bowl, through fun rugged terrain, just jumbled enough to make for fun navigation. I veered right, away from the saddle, to gain a high point first, and then dropped to the saddle, which I discovered is actually a remarkably flat open area, with an amazing view into the crater.

I had hoped to ascend Sugar Bowl from the saddle, but it was a little too steep/crumbly, so I dropped just enough to get into easier terrain and then began a traverse clockwise around the bowl until I saw easier slopes to ascend. There's a cliffband maybe about 2/3 up, so I wasn't able to see top. After getting past the cliffband crux, I was rewarded with moderate safe slopes to the top. At the top, there was sort of a frenulum/saddle connecting SB to the rest of St H, and I followed it until it faded, then over to a platform hanging over the crater.

I'd been considering continuing up to the true crater rim (maybe SB counts as part of the rim, but it's a stretch), but up close I realized it would be a brutally steep mix of sandy slope barely held together with rocks. It was possibly dangerous, but definitely unpleasant. My day had been 90% fun so far, and I didn't want it to end in frustration and misery just for one more viewpoint, so I called it quits.

The routefinding challenge for the descent wasn't finding what could work, it was finding what would be the most fun. I looped around the sandy slopes of upper SB, connected with my ascent route, down through the steep rocky part (required caution, but never felt really dangerous), then down the steep pebble-and-sand slope to the gentle grassy slopes that I explored back to the trail (ended up right at the spring).

I started my day late, passing through the Windy Ridge gate exactly at the moment the sun broke over the horizon, so it was funny that I arrived back there as the sun was about to dip out of sight. Just for fun, I waited for it to drop, then raced up the 450 steps to the Spirit Lake viewpoint so I could see the sunset again. Harder than I thought. I dawdled at the bottom, and that cost me. Or maybe it just isn't possible. Maybe I should have watched sunrise from the top, and raced down to see a second sunrise.

Weather was just about perfect. Windy on my departure from the Windy Ridge TH, and cold enough that I had to drive slow on the frosty road coming up, but I never put on my jacket or gloves all day. The wind stirred up dust, which wasn't too uncomfortable, but crater views suffered a little.

I started later than normal because I don't know this part of the mountain well, so a headlamp start seemed foolish. Amazing how little ground I covered. That's mid-October for you. I spent almost as long on the drive as I did on the hike. No regrets though. A summer hike with a few extra hours would have been hot, buggy, crowded...no thanks.

Other mammals seen: A couple hikers headed over towards Windy Pass, lots of elk (higher than I've seen them before), a couple goats.

It sure didn't look like this the last time I was here. Sugar Bowl is the obvious big dome.

That tree was a landmark all day, visible from many points along the way.

So much exploring to do, so little time.

Flatter than the Plains of Abraham.

I didn't know the glacier lobes had merged! About ten years ago, they say. I once followed that creek up to the dome and around to the back, but now that would be unpleasant and dangerous.

Amazing to see a glacier in 2018 plowing its way down a mountain. Will it ever tumble over Loowit Falls? I want to see that before I die.

Reminds me of those boulders you see on gaciers, perched on pillars of snow.

When your shadow is this long at noon, you know you're on a steep slope.

That was a long day. You can't explore that part of the mountain in a short day unless you have wings.

I'm familiar with the MSHI crater view route. There are plenty of footprints to follow up from the official Loowit trail spur. Within a half mile of following those footprints there is a large flat area with a great crater view. From there, higher uphill progress another quarter mile dead-ends in a slidey, crumbly gully of red rock. I think that's the crater side of the Sugar Bowl peak. There is no safe way higher even with ropes. I'm certain of that.

The Sugar Bowl peak location was a mystery to me but lately it's shown up on Google Maps at the top of the Nelson and Ape glaciers. For all I know, it could have been on the map for much longer. It's the terminal location of the second crater rim trail that the FS recently decided to not build.

Fun place to explore! I definitely have more wandering to do in that area. Agree that there's little hope of getting up from that nice crumbly crater view, but Windy Pass sure seems like a great place to head uphill! There's even a trail, with posts, heading up there...

kepPNW wrote: ↑
November 1st, 2018, 5:37 am
Fun place to explore! I definitely have more wandering to do in that area. Agree that there's little hope of getting up from that nice crumbly crater view, but Windy Pass sure seems like a great place to head uphill! There's even a trail, with posts, heading up there...

Thanks! That pic says it all (I think). Please confirm this: We're looking at the top of Windy Pass on the Loowit Trail (#216). The left circled post marks the top of the pass. The right circled post marks a route to the Sugar Bowl. I think I remember the posts but I thought the uphill post was an old tree carcass. I've seen many goats up there more than once.

Which hump is the Sugar Bowl in the distance (left or right)?
Top

The hump on left is way up on the rim. I think the one on right is Sugar Bowl, but it could be out of view? Can't recall, exactly.
Karl
Back on the trail, again...
Top

That was a long day. You can't explore that part of the mountain in a short day unless you have wings.

Yeah, I was surprised at how the day slipped away. The shorter days, the road walk at beginning and end, my desire to start in the light, all limited what I could do. But I hit all the important points; more time would have just been wandering and dawdling (or foolishly trying to tack on another adventure). It was satisfying; I didn't feel cheated.


The Sugar Bowl peak location was a mystery to me but lately it's shown up on Google Maps at the top of the Nelson and Ape glaciers. For all I know, it could have been on the map for much longer. It's the terminal location of the second crater rim trail that the FS recently decided to not build.

USFS says Google is wrong. USFS says Sugar Bowl is at the "X" I placed on the map below. Incidentally, the Google SB is left of the upper red circle in kepPNW's pic below. The next one to the left is Dogs Head (Google got that one right).

The Google SB is probably best accessed from Windy Pass, or perhaps directly from Plains of Abraham. Either should be fine. The USFS SB isn't a good destination from Windy Pass, as one would have to cross a gully/canyon (Forsyth Glacier on Google map). I suppose it could be done, especially with snow, but it looks like a hassle.

Interesting that there's so much disagreement about features on MSH. For comparison, it would be absurd if somebody was uncertain about the location of Illumination Rock, Barrett Spur, Steel Cliffs (on Mt Hood). Oh well, it's a fun discussion.

Intriguing. Where are you finding that? Looked at the USFS topos on Caltopo, and neither showed a label for this feature.

Shoot, they don't even give it a point elevation, if I'm reading you right?
Karl
Back on the trail, again...
Top

johnspeth wrote: ↑
October 31st, 2018, 5:58 am
It's the terminal location of the second crater rim trail that the FS recently decided to not build.

Can anyone clarify on this or provide a link. When you say second crater rim trail that they decided not to build, do you mean in addition to the south side monitor ridge or is that separate from the 'Crater Glacier View Climb' project they had developed a few years ago, given the reins to MSHI on and said that at some future point it might be open to the public like 'Monitor Ridge'. Though if it isn't in the blast zone I don't know why it would be verboten if you had the usual 'climbing pass'.

Anyways chip, that is AWESOME!!! Love seeing your explorations there. I haven't ever had the gumption or chutzpah to actually get up into the crater though I suppose it would be a bucket list item--I've heard there's actually some good 'hot spring' soaking opportunities up there, second hand.

What was it like being at the back of the dome? 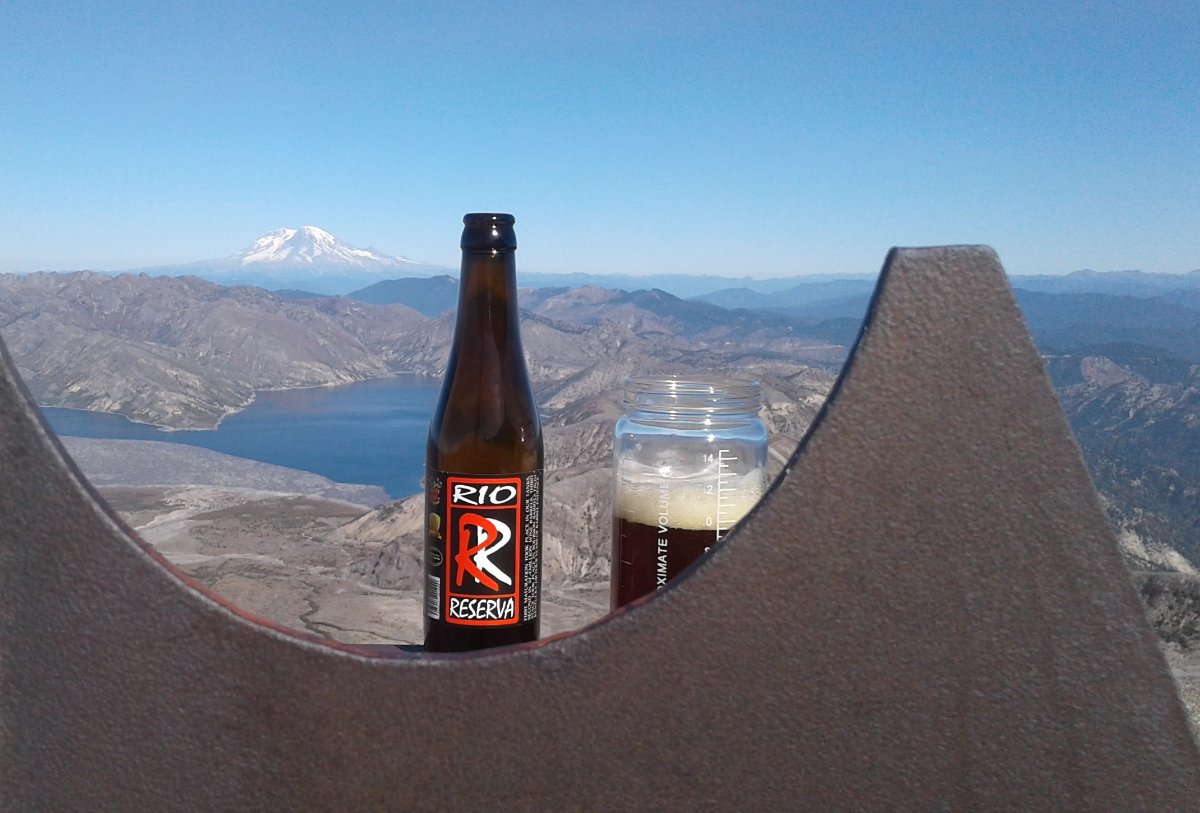 
Water wrote: ↑
November 2nd, 2018, 10:28 am
I haven't ever had the gumption or chutzpah to actually get up into the crater though I suppose it would be a bucket list item--I've heard there's actually some good 'hot spring' soaking opportunities up there, second hand.

Like where you don't boil alive in a steam vent? I wouldn't even have guessed there was standing water up there...
Will hike off trail for fun.
Top

Isn't a bowl, a bowl, not a peak, so sugar bowl would be like where Nelson glacier is? That's where the text "sugar bowl" is on my old map.
Top
Post Reply
26 posts