Plan was to hike the PCT from Timberline Lodge to the ZigZag canyon edge, drop directly into the canyon, follow the creek up, take the left fork at the obvious split, follow it up to Mississippi Head, explore the B26 wreckage below the cliffs, loop around Mississippi Head clockwise to the ZigZag glacier, ascend ZigZag Glacier and drop back to the lodge.

Started with an extremely light pack; no climbing gear, no water. Dropping into ZZ Canyon was slightly trickier than expected. I saw good opportunities high up, but instead tried the ridge the drops down from the high point just "dowstream" from where the PCT hits the canyon. It was easy, but brushy at the bottom, and since I couldn't see the creek I didn't know if there was a dropoff at the bottom. Worked out fairly well though.

Before heading up the creek, I wanted to start by following it down to the top of the falls that you can see from the PCT crossing. Surprisingly, I was pretty much there already. So I guess with all those switchbacks the PCT takes down into the canyon, it really doesn't end up very far downstream.

Everything pretty much went according to plan. I misjudged the difficulty of several stretches (some were easier than expected, some were harder). Overall, took longer than expected. I was shocked when I checked the time at ZZ Glacier and it was 4:00 already.

Last weekend we had a break from the smoke, but yesterday it was back with a vengeance. By early evening it cleared up a bit and we had some blue sky, but by then I had a sore throat. I'll be caughing up sootballs for a week.

Although the weather was generally good, it was colder/windier than it's been in months. Wore lightweight gloves nearly all day. Breaks were huddled behind rocks when possible.

Didn't see another person all day.

This picture was taken last weekend from the top of Mississippi Head. Top arrow shows where I dropped into the canyon, along the obvious ridge. Bottom arrow is where I gained the top of the cliffband. Note waterfall to left.

It's quite possible I've never been here when it was bare. I know I've never followed the creek up.

The split. In the middle is the medial ridge/moraine I spent some time on last weekend (dropping from above, but not to the bottom). I was surprised to see so much water in the right branch. Mississippi Head is almost completely hidden, but you can just see a couple horns poking out near center.

I knew the creek passed through this narrow gap, and I feared there might be a steep dropoff (falls) and/or possibly a slot fully occupied by water. But nope, I came around a little bend to find this. No problem at all.

Looking back down on the gap.

The canyon opened into this lovely verdant basin. You could camp here for a week and see nobody.

Didn't see an easy/safe way up this. Maybe I should have persisted. Part of the problem is it came into view late, as a surprise, and I guess I interpreted it as a minor side fork, so didn't put much effort into it after I hiked up to the bottom.

So retreated a bit, back to the basin. Was pretty sure I could get around the lower fall to the left, but attempted the one on the right instead. In retrospect, this may not have been the best plan.

An example of the cliffy section I had to get over. Not really difficult, but loose and crumbly/unstable. Spent a looong time looking for an easy/safe workaround, but finally just had to deal with it. I was highly motivated to succeed on the rest of my hike, because I was nervous about having to downclimb.

Looking down at the top of the falls. I didn't go down there. Figured there wasn't much to see.

Looking up at Mississippi Head after getting above the waterfalls and cliffs.

Finding the B26 parts took some persistence. It's more rugged than the propeller zone above, and it's easy to pass 20' from something and not see it.

I imagine this must have come down from the top of the cliffs, but I wonder why it was up there.

Looking back from the bottom of the Mississippi prow.

The gully that wraps around the Paradise side of MH is shallow and boring compared to the Palmer side.

I was worried about the possibility of the gully ending in a headwall, so it was a relief to see this.

Silty runoff on the ZZ Glacier.

All downhill from here, time to relax.

Is there a name for either of those falls above the Zigzag crossing?
Top 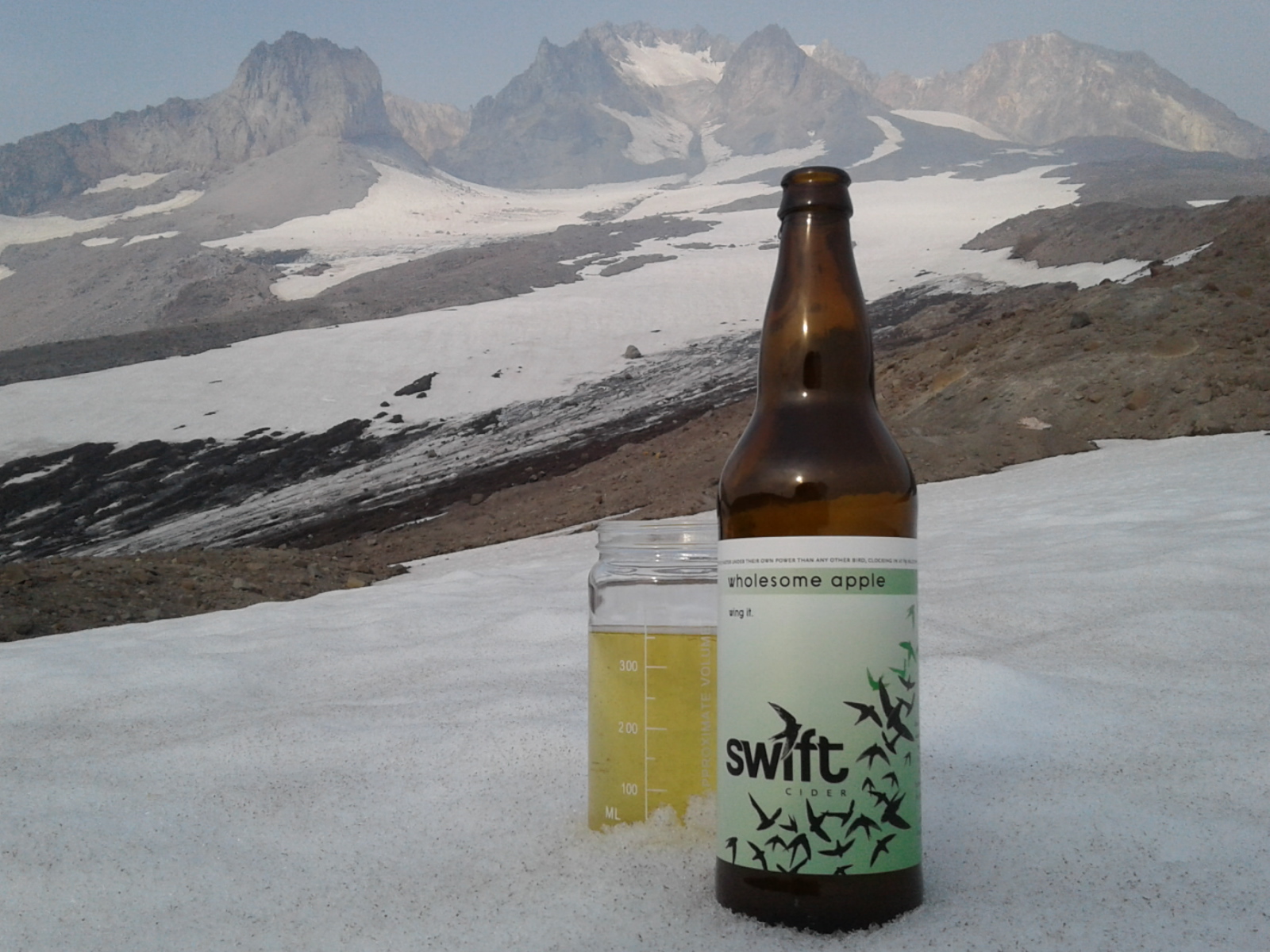 Derwood, the falls up the canyon are likely too obscure to attract a name, so I doubt they carry official names. But the one closest to PCT should have a name, considering how much exposure it gets. I suppose if one were to refer to it as the ZZ/PCT falls, everybody would know what it meant. The upper one could be tagged ZZ/MH. The others along the side aren't worth naming.

I can always count on Bos for commentary on my beverage selection.

Chip Down wrote: I can always count on Bos for commentary on my beverage selection.

I'm just biding my time until you start posting about almost getting lost in the Gorge again.

Though maybe that won't be happening for any of us until next summer...

Forecast called for snow early Saturday morning above 7500. That's a pretty low snow level for August. I wanted to see it. It was drizzling on the drive up Laurel Hill, so I was worried about a wet start, but no rain at Timberline.

Decided to repeat my Zigzag Creek hike, but with a different exit from the canyon. Then a loop above Mississippi Head would hopefully take me into the snow zone.

At the Zigzag overlook, it was getting light enough to see there was no new snow up there. Bummer.

Dropped into the canyon. I had been apprehensive about that. I don't know why; it's not as if I remembered it being particularly difficult.

Ascended the creek, took the left fork, through the pinch-point, and then ascended out of the canyon earlier (lower) than last time. It was easier this way, but not as easy as it looked. No big deal, not scary, but I was really hoping my route worked out, so I wouldn't have to downclimb.

As the terrain leveled off, I ran into the trail than runs from east Paradise Park to Mississippi. I wasn't expecting it so soon.

Rather than ascending to MH, I continued north to Paradise Branch, so that I could survey Illumination Park. I'v been here before, but not since my explorations of Illumination, so it was fun to revisit.

Then up to MH, and a typical descent to Timberline.

Other parties:
As I walked from Timberline to the ZZ overlook, I noticed there was a pair of hikers behind me! (Shocking because it was dark.)
A few people in upper Paradise, and one person on MH. A pretty quiet day overall. Of course, crowded once I was within a half mile of the lodge, including a paraglider coming down from Palmer. Is that allowed? I can't imagine it is. I hope he was caught and jailed (yes, of course I'm envious, duh).

Oops, this pic is out of sequence. Looking across ZZ canyon, the early morning sun highlights the intermediate ridge/moraine that blends in when the entire canyon is in direct light.

That broad verdant gully was my Plan B ascent out of the canyon. Across the canyon and downstream, my entry ridge is illuminated.

An unusual perspective on Mississippi Head. B26 site is upper right.

My canyon escape route getting easier and even more scenic.

Looking down on Mississippi Head. The clouds are starting to put on a show.

anyone that does cool things you're not able to do should be jailed?