I don't really know where to start. Whale Creek, which is the creek that flows into the now-closed Indian Henry campground, is the most rugged, inhospitable place in the Lower Clackamas River canyon. Whale Creek canyon is completely cliffed in on three sides, with the cliffs on the western rim reaching 1200' tall in two places. The whole canyon in general is a rugged / unwelcoming place that has defied all but the most committed following.

I've previously made 3 trips into this unforgiving place, and only ever got to the base of the lowest two waterfalls. While the lower two are nice falls, the best ones lie further up the cliffy gorge, with no confirmed way into the deep bowl without a rope. Recently a few canyoneers did two descents of the creek, and got excellent photos of the falls. The upper most falls by their estimate was a plunge over 200 ft tall! Now I HAD to get there! Rustygoat Tim and Merelunacy Melinda have also been very interested in getting up there. I'd been with them before, and knew they were up to the challenge of this most unrelenting place.

We arrived at the Indian Henry parking lot at 8:30 am and set out along the creek from the parking lot. Theres an old trail that follows the creek for a little ways, and I believe it's there because of the water supply for the campground. The creek starts out flat in a beautiful old forest. It was still frozen over 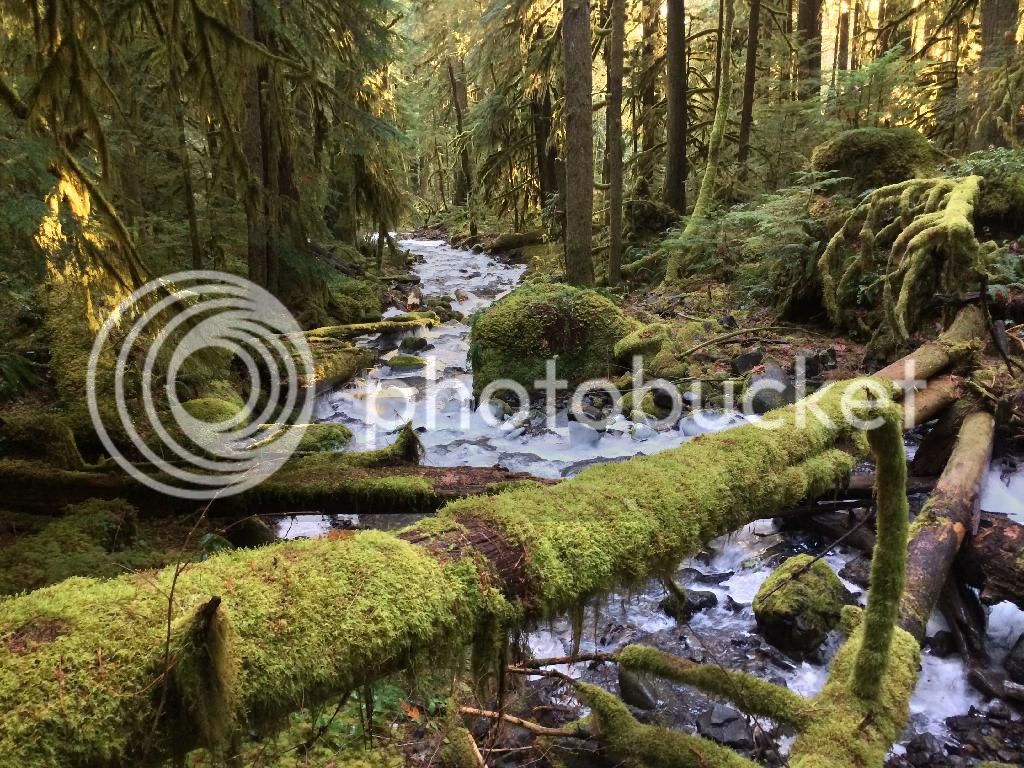 After the trail petered out, we headed up the west hill towards the base of the towering west rim, to avoid having to traverse the gnarly creek bed. In due time, we reached the lower falls. The ice from the recent freeze was still there.

The falls are hard to show in a photograph, better to see it in person. The falls shoot out from the cliff in a narrow spray at the base of that towering west rim. Cool spot. (Used an iPhone 5s for all these photos). 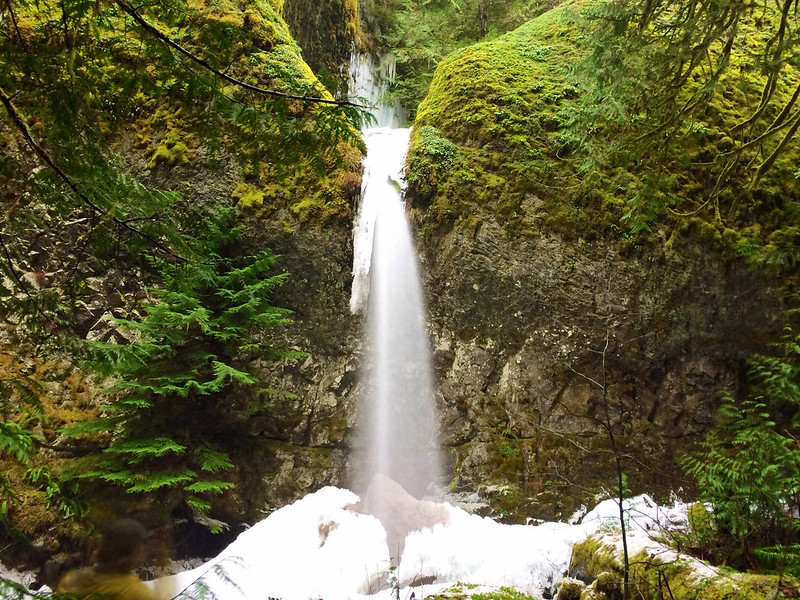 Side view showing the falls shooting out. 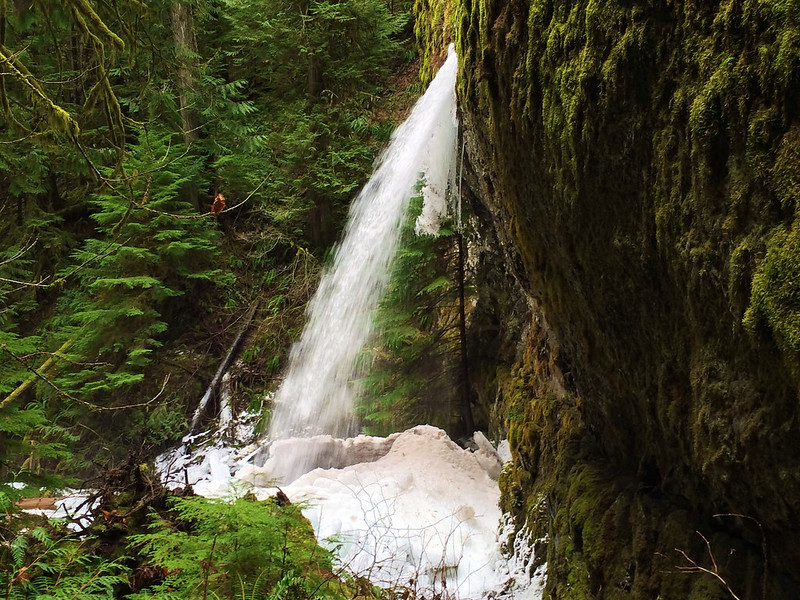 From this lower falls, we headed up the neat narrow gorge to the right along the side creek up far enough to a landslide that we could scale to get above the first of many big cliff bands to come. Once above the cliff, we headed up through a maze of large downed logs. In not that far, we caught a glimpse of the next falls. This second falls were the only other one I'd been to the base of.

When we got there, it was a lovely scene with even more snow and ice hanging around. 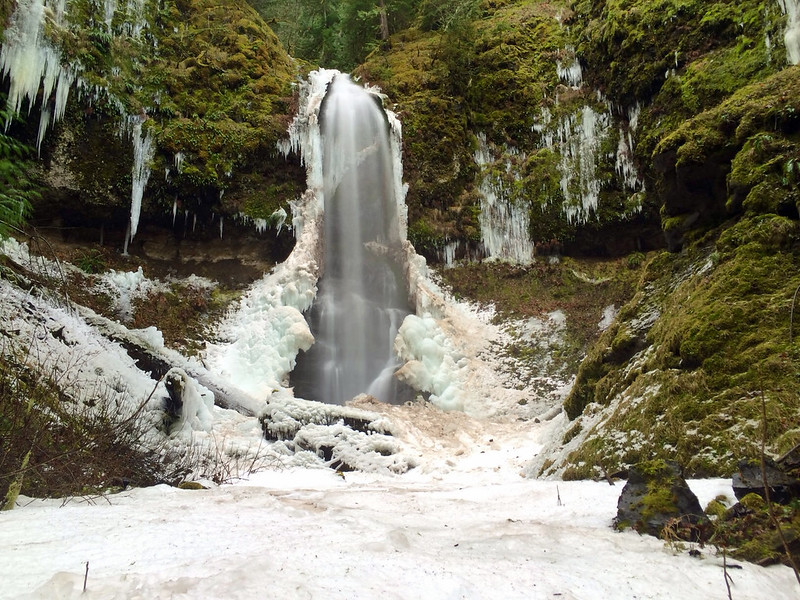 I had observed on my prior trip, is that the west side above the falls is 100% cliff all the way up to the big rim. But, on the east side, there appeared to be a steep gulley without any outcrops, that was scaleable. After our photo session, I went and scrambled up to scout out the possibility of going any further. As I went up, the cliff started growing, which dampened my spirits. I kept going anyway, seeing that I had just stumbled upon a major game path. I was figuring the elk knew where they were going.

Just ahead, I seen above me what looked like a tiny break in the cliff. When I got there, I had before me the biggest stroke of luck I've had out waterfall hunting in a while, a notch in the cliff that we could scale to get into the next level of the canyon! Whew! Tim and Melinda were making their way up to me, so I scrambled up through the notch on the steep elk trail, and waited with excitement for them to see that we would be getting to the third falls.

They eventually made it to me, and we headed to the third falls through an ancient burn below another towering cliff (seeing a pattern here..).

It wasn't very far to the falls, they turned out to be pretty nice 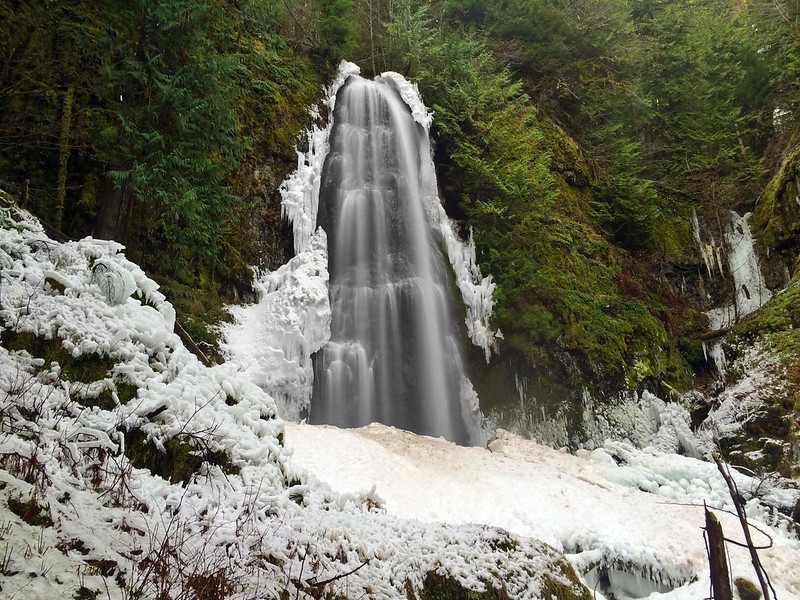 We took our photos and videos, and I headed out to scout for a way above the falls. The amphitheater itself was cliffed out to the big western rim again, but the east side showed some promising gouges in the headwall that I was really hoping to find a way up. We were ever so close to the big one. I headed along the eastern cliff, and climbed up to a ledge we had seen on the way in. I followed it up, and it appeared to dead end. I poked around some more and decided to sidehill above the cliffs, holding on to ferns. Just over from me I came upon a steep gulley with no rocks. It was steep, and I didn't know if it was climbable. I tried to climb it anyway, and to my pleasure there were just enough handholds to use to pull myself up the muddy slope. I eventually got up it far enough to look to my right, and see that I had indeed found a way to get above the cliffs! I slid back down and waited for Tim and Melinda to catch up so I could tell em where to go. They made it up the hair raising mud slope like champs, and we all three set off for the big one. It was a little rougher going in places, lots of big logs to find ways around on the steep slope. We were going, and we finally spied a huge column of white ice through the trees. Not much further, we could see water falling from the treetops, jackpot!

I broke off and headed on a lower line toward the creek. Tim and Melinda stayed high, but it didn't matter, the falls were a great sight from all levels of the slope. I never im
agined getting here without ropes. I was in denial at first that I was really feeling the mist of this elusive waterfall. I immediately pegged it at over 150 feet tall.

Finally, Whale Creek Falls, (The mound of snow and ice was enormous) 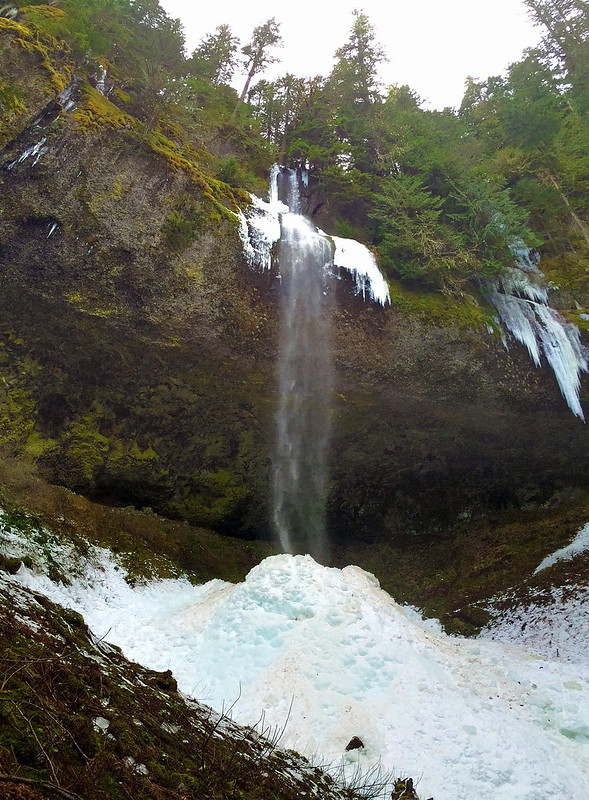 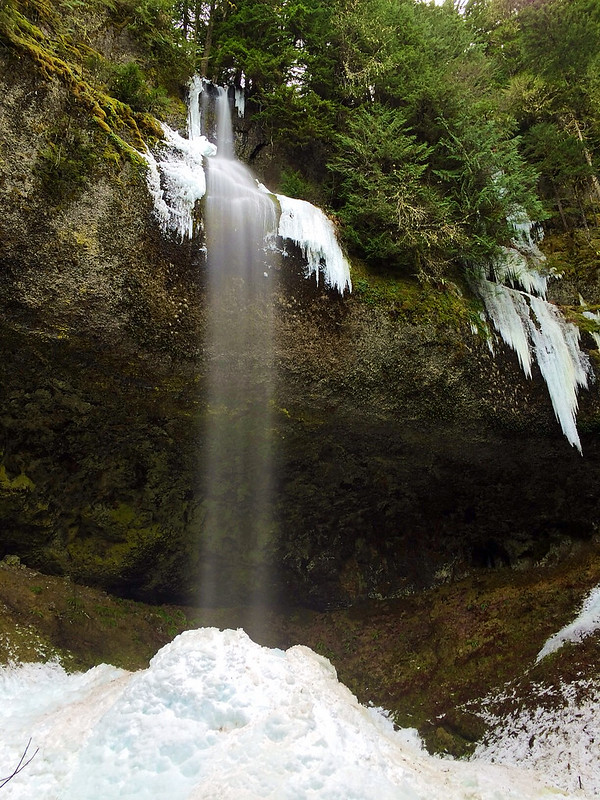 We all eventually met on the slope and shared a celebratory shout. The biggest waterfall I had left to document up the Clackamas had finally been conquered. Photos don't do it justice, the cave behind the falls was huge, and made of smooth rock. The lower canyon was filled with Columnar Basalt, so this was a change of geology.

In due time, we headed back. We followed our tracks, down the mud slope and onto the big ledge. Once off the ledge, we headed back to the notch. We made it through the notch, and decided to try staying on the east ridge instead of heading back down to the horrendous conditions down at the creek far below. We followed the east ridge for a decent ways, not losing much elevation. We went further still, and eventually came to a cliff, a tall one. I'd been through this before on this side, and was not looking forward to having to deal with it this late in the game. I let Tim lead to go find a way down. We followed a game trail along the rim, looking at every gulley. None were clean. Tim went further ahead, and found what looked like a moss/mud gulley that was almost clean. There was a massive game trail leading down into it. Seeing the game trail perked my spirits up, the elk had to be going somewhere. Well, the gulley was descendable, but oh baby. It was a long ways down on a slope of mud that the elk had slid down themselves! One by one we glissaded/rode our heels down to the base. Whew, hopefully no more of that. Well, in not too far, we came upon another cliff, this one shorter. We stayed on the game trail, and found pretty quickly a gulley that was very clean, and had a path through it. Once we got through this, it was just a matter of sliding/scaling the steep terrain til we could see Sandstone Road. One last little steep spot and our boots were on pavement. Success! It was 3:50 pm, we had conquered the Whale, and nobody was seriously injured

Great day out guys, I never imagined having the success we did, and to make it back with daylight left. That was one of the best days of water falling I've yet to experience. That is truly a Whale of a canyon. Hopefully you guys got a few shots of the cliffs and other stuff, as I only took photos of the waterfalls. Thanks again for headin out with me!

Great narrative, description and pictures of what sounds like an epic day. Tim mentioned joining forces with you in the past and without a doubt that makes for an all star cast of waterfall hunters. You three are awesome!


I have really enjoyed watching you all explore these amazing waterfalls over the past year!
Top

Brian! Nice job! I am so glad that you were able to make it up the creek and see that beast of a falls in person. The top of that snow dome has to be at least ~25 feet higher than the pool level methinks. I almost couldn't believe what I was seeing in that pic. You will definitely have to make it back in summer - there's a really neat rock formation on the backside of the pool that is completely obscured by the snow/ice. Here's a shot of the Whale in summer clothes - the greenery is amazing, had to desaturate it so it looked real.

Nice photos Evan, your trip is the very reason we gave it another try. Thanks for the inspiration. That falls looks awesome in the summer! Ya that snow pile was over 20' tall easily. I was still glad to be standing at its base feeling its cold mist. It has a much different look and feel then the rest of the falls downstream. Great spot that only the most daring will get to appreciate in person.
Clackamas River Waterfall Project - 95 Documented, 18 to go.
Top

Sean and will, thanks for the kind words!
Clackamas River Waterfall Project - 95 Documented, 18 to go.
Top

Wow! Amazing report -- and great photos, as always! You're doing a great job getting all those (previously) unknown Clackamas waterfalls on the map, Brian. Should help protect them in the future, should some USFS timber bureaucrat have the bright idea of auctioning Whale Creek timber off. All four are nice waterfalls, but that upper falls is especially beautiful..!

Speaking the feel, Brian, on the first trip we didn't venture into the cave because of daylight remaining constraints...but the ampitheater felt heavy - like humans weren't meant to be there or we had stumbled upon some not-to-be-mentioned magical place - we were awestruck. The second trip we made into the bowels of the cave (with some mishap) and I had the same feeling...I haven't felt this way with such magnitude in all my experiences in the wild. This specific spot is special to say the least and I would like to see loggers try to get in there...it would be a logistical nightmare; most likely impossible.
Top

I was beginning to think you might have retired