In 2010, Pablo did a loop over Silver Star and down the S ridge of Bluff Mtn off the Bluff Mtn Trail (Pablo's Silver Star Loop 2010). Although it sounded like an interesting hike, his vivid descriptions of ferocious brush on parts of the ridge, plus having to hike back up Rd 1200 to his car, weren't encouraging. But this got me looking at the S ridge of Little Baldy - maybe the brush would be as bad but you could start and return to the same TH without use of the road. So Saturday found me parking at the TH for Silver Star's S ridge trail (#180). After passing the gate, I turned right on a newish logging road and headed NE toward the West Fork of the Washougal River. It was overcast, and misty, but warm, as I started out and would stay that way until the Bluff Mtn trail. 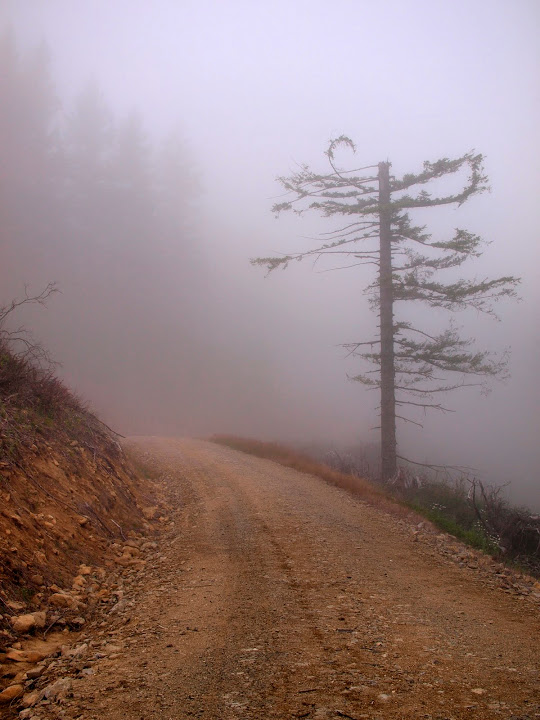 This road goes a little farther NE than is shown on the map but it eventually ends abruptly at around 1800'. From there, I struck due E toward the river through brushy but not too dense forest undergrowth. Despite very slippery rocks, crossing the river was no problem. 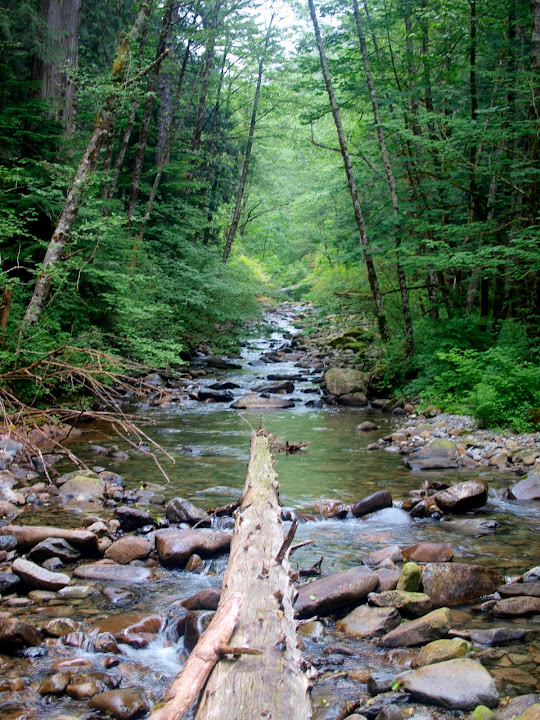 On the other side of the river, the brush was denser but still easily passable until about the 1800' level where it got to be tough going. I pushed (literally) on and eventually popped out on to a dirt road at about 2000'. There were clearings near this road that had become meadows carpeted with many flowers. 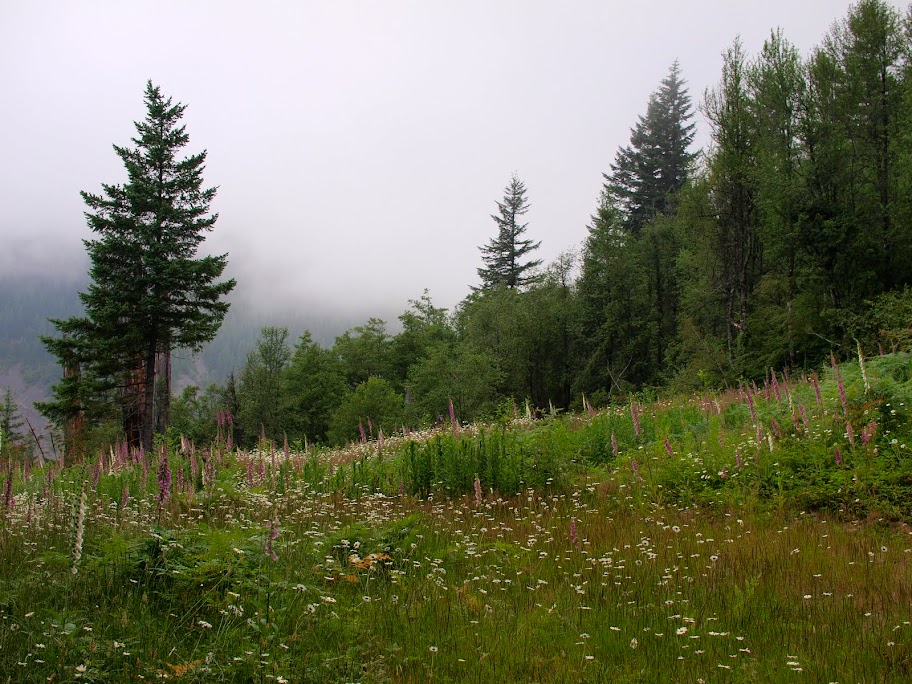 I followed the road - parts of which are shown on the 2010 NGS topo map and parts of which appear new - up the ridge to 2400' where it ended. Now it was back into the brush for some really serious brush whacking and micro-routefinding through often nearly impenetrable thickets of various kinds of leafy barriers. There were a few game trails, but otherwise it was very, very slow going. Finally, at about the 2800' level, the first small boulder field appeared to offer respite from the brush. By 2900' there were enough boulder fields to allow me to pretty much avoid the brush. Several of these fields seemed to have an actual trail built into them, 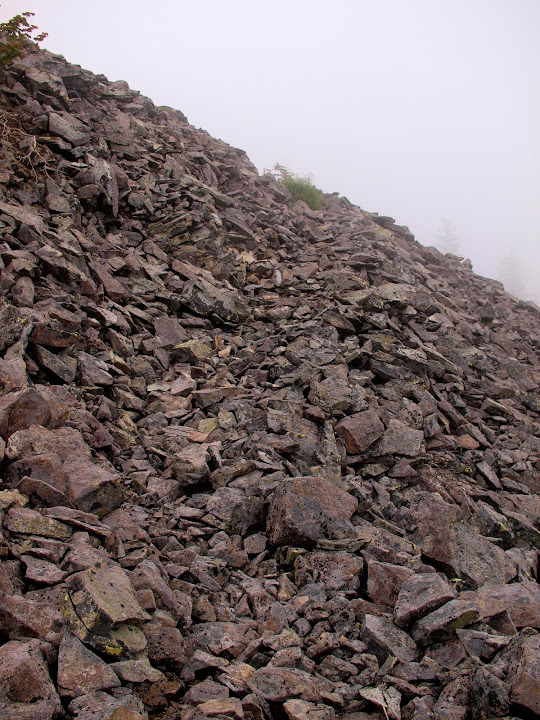 but any semblance of a trail ended as soon as the brush returned. If there was a trail up the ridge in the past that was a long time ago. Movement up the boulder fields on the upper ridge was easy and I made rapid progress toward the Bluff Mtn trail. The last "brush" ordeal involved passing through a grove of small, tightly packed pine trees - like a Xmas tree farm. Soon after that I was on the Bluff Mtn trail but still in the clouds. 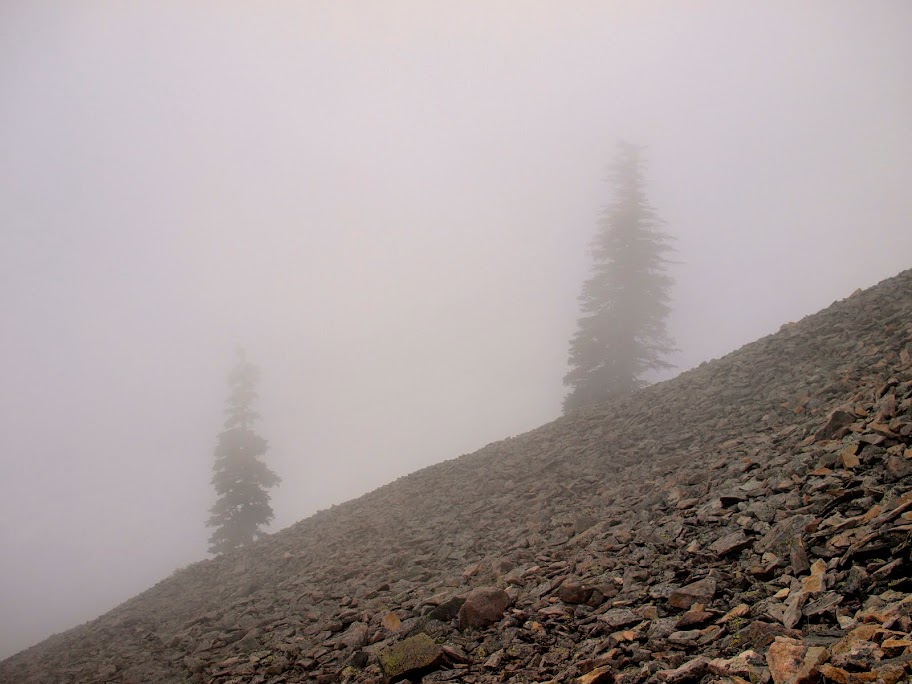 It seemed that after all the thrashing up the ridge I would be denied the reward of a view - any view. But as I followed the Bluff Trail toward Silver Star, the clouds started dissipating, 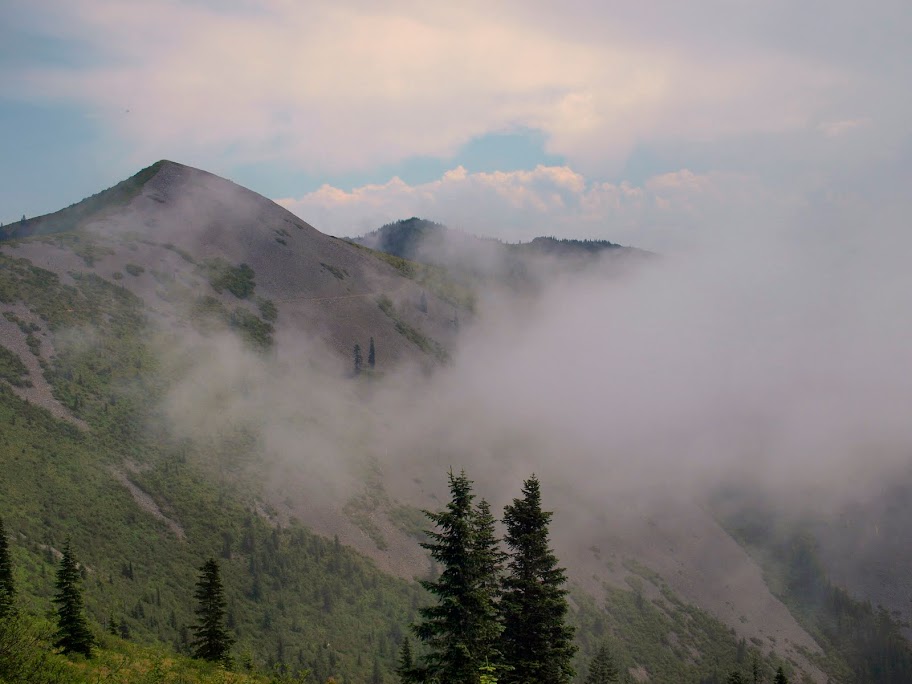 and Silver Star came into view. 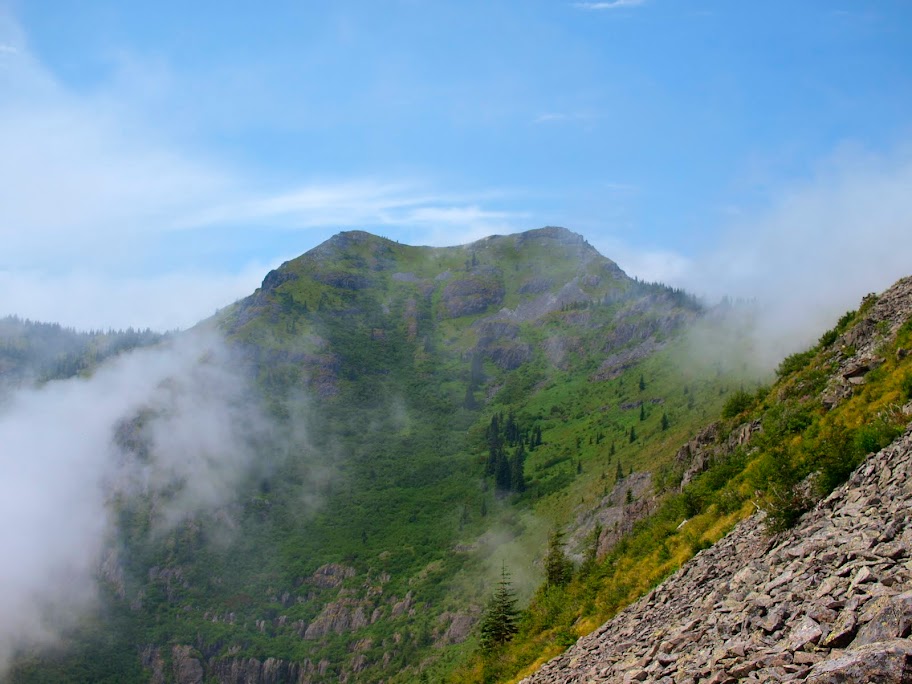 I could look E and see almost all of Little Baldy's S ridge - the upper part which is mostly open boulder fields except for the densely packed "Xmas tree farm" (x), 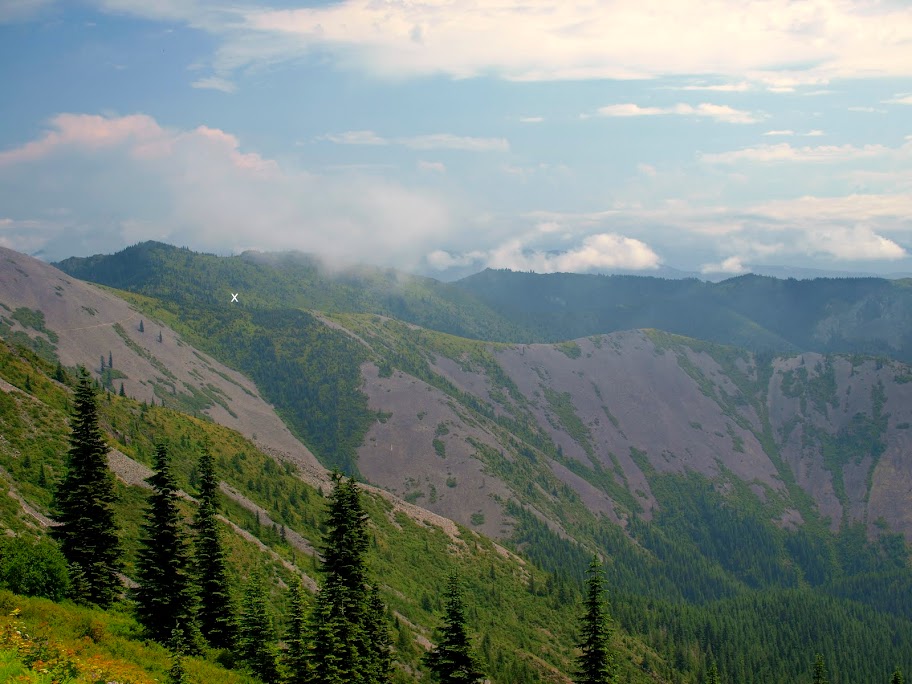 and the lower part with its long stretch of brush (b - b). 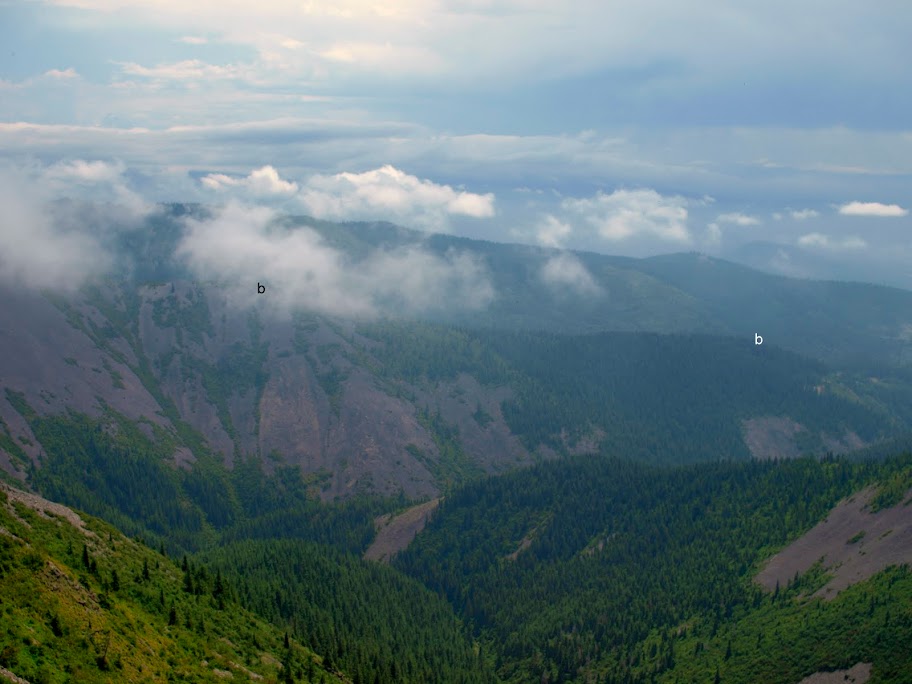 From the summit, the clouds still swirling about cut off views of Rainier and Adams, but did allow for glimpses of Hood, 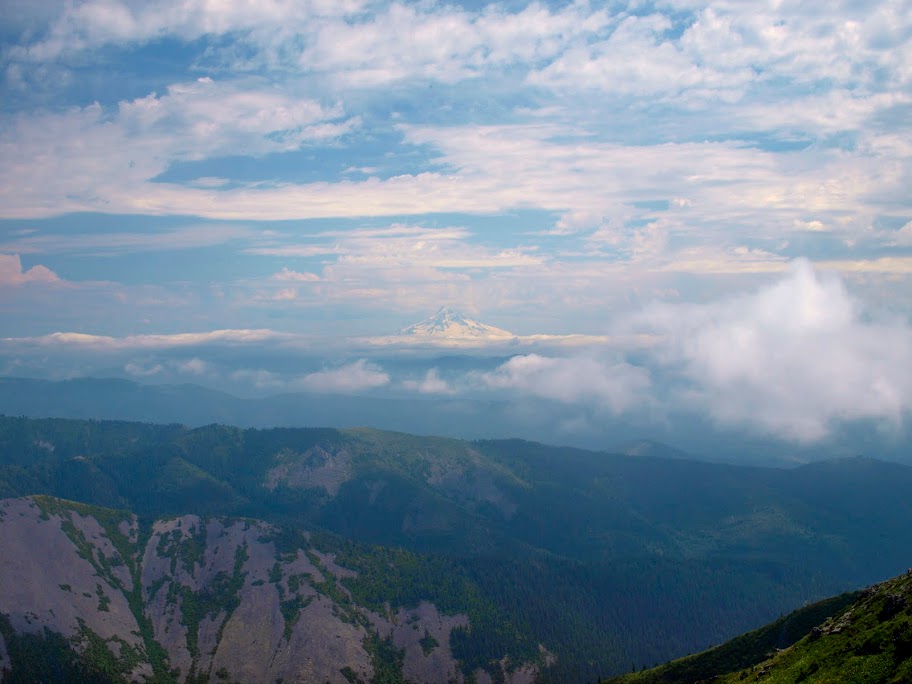 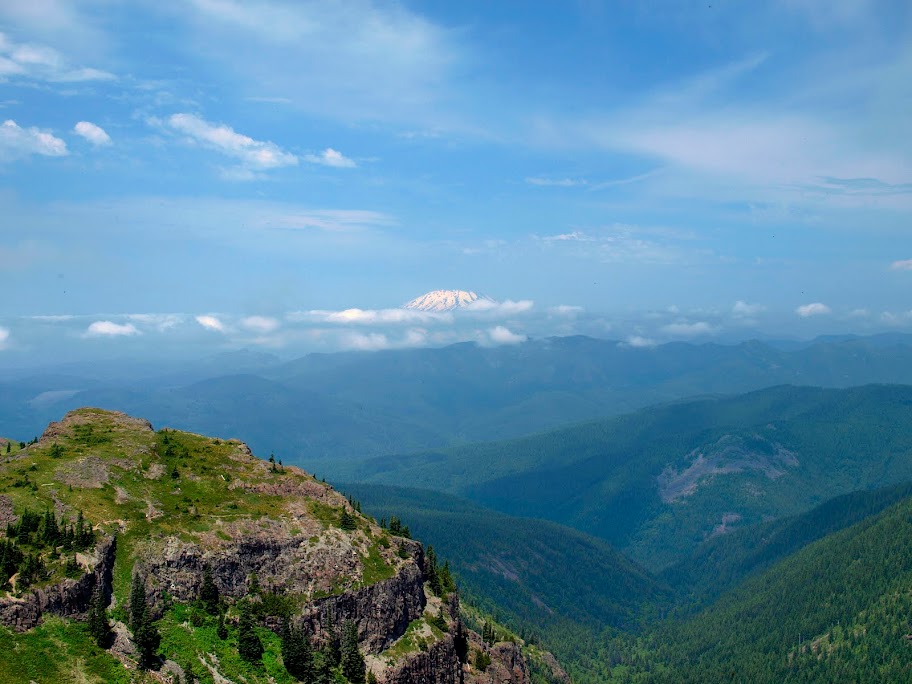 Sturgeon Rock, with meadows of flowers in the foreground, 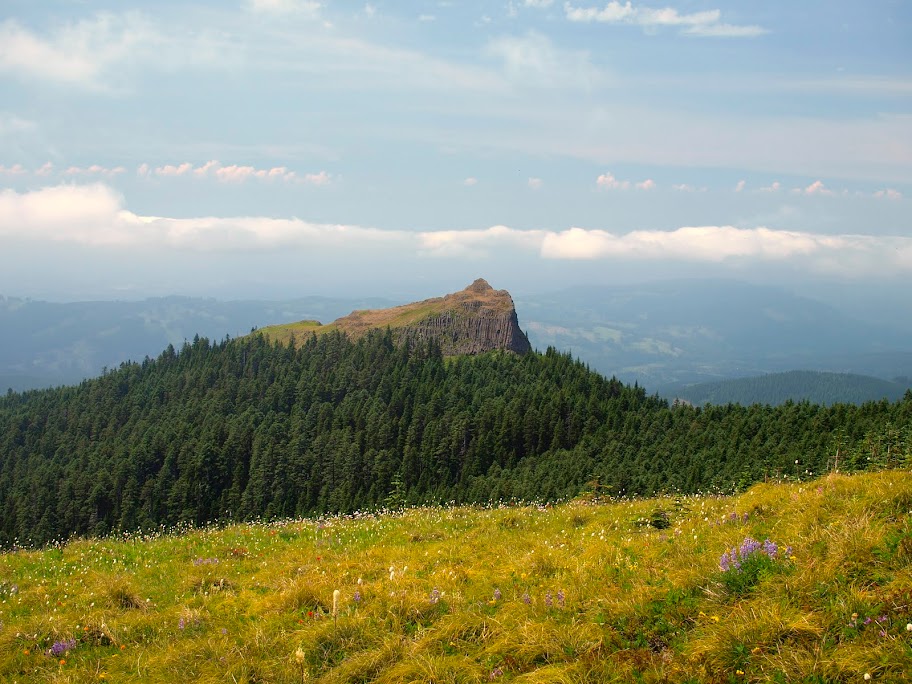 and the peak on which the Silver Star Indian Pits reside (with Hood in the background). 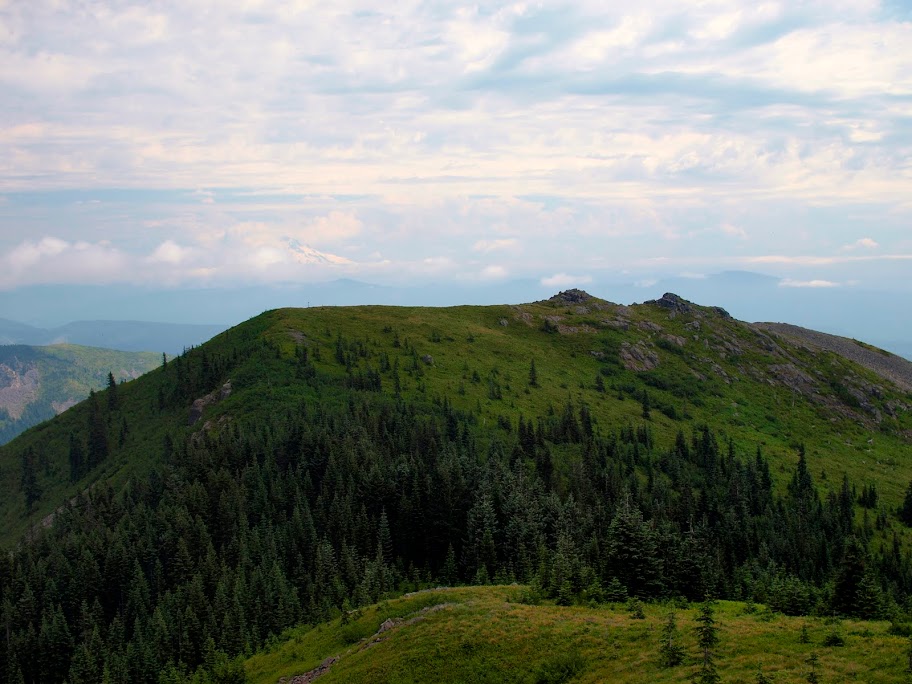 From the summit, it was an uneventful and brush-free journey back to the TH via Silver Star's S ridge trail (#180). Despite the brush, this was a good adventure hike and yet another way to do a loop on Silver Star's E side. 11 mi RT, 3000' EG. 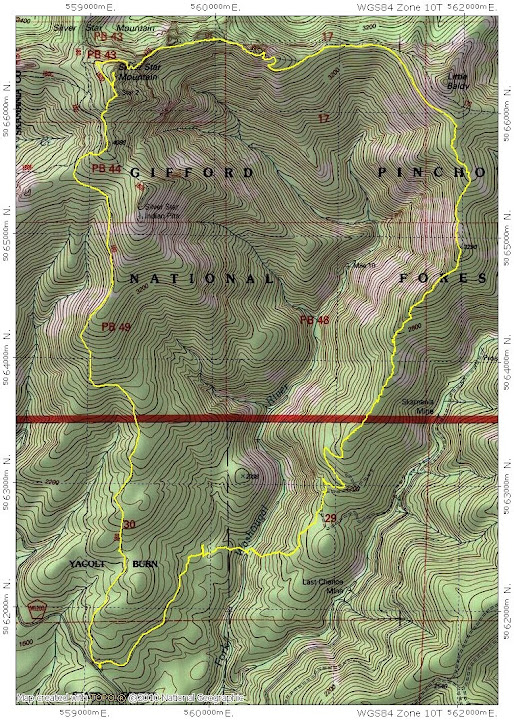 Wow that sounds like quite an adventure, as you say. Glad you got some views as reward for your hard work!
Hannah

Very nice loop & beautiful photos. That brush you encountered on the way up is no doubt the same type stuff I encountered on the other ridge, tough going. This looks like a nicer route than the one I took, sure ends better - do all the tough stuff while still fresh and relax on the way back.

Very nice loop & beautiful photos. That brush you encountered on the way up is no doubt the same type stuff I encountered on the other ridge, tough going. This looks like a nicer route than the one I took, sure ends better - do all the tough stuff while still fresh and relax on the way back.

Thanks! I almost went the way you did - over Silver Star first and then down the ridge. Luckily I decided to get the hard/unknown stuff out of the way first. It was a relief to have nothing but clear trail between the summit and the TH on the return.
Top

Bruce, Thanks for documenting that route - I've wondered about it and your report is a great incentive to go do it myself.

-don
"Everything works in the planning stage".
Top

Chinook Trails are in the process of building the last part of their trail from Bluff to the Washougal River to link up with Gibbons Creek trail to PCT.
Top

beag wrote:Chinook Trails are in the process of building the last part of their trail from Bluff to the Washougal River to link up with Gibbons Creek trail to PCT.

Pablo ,You are correct. It is Stebbins Creek not Gibbons which is in Washougal. Don has a map of the trail from the Washougal River to Three Corner Rock.
Top
Post Reply
8 posts • Page 1 of 1