I referenced BrianEdwards' winter whale creek adventure post for some of the directions. They had some amazing photos of the waterfalls during the winter. I thought it might be nice for me to post about my experience and some summertime photos.

I arrived at Indian Camp Trailhead around 11 in the morning. Opposite to the pup creek trailhead was a trail taking me to whale creek. The creek immediately took me away with its beautiful scenery and calming tranquility. Not too far up the creek, the first waterfall came into my view. 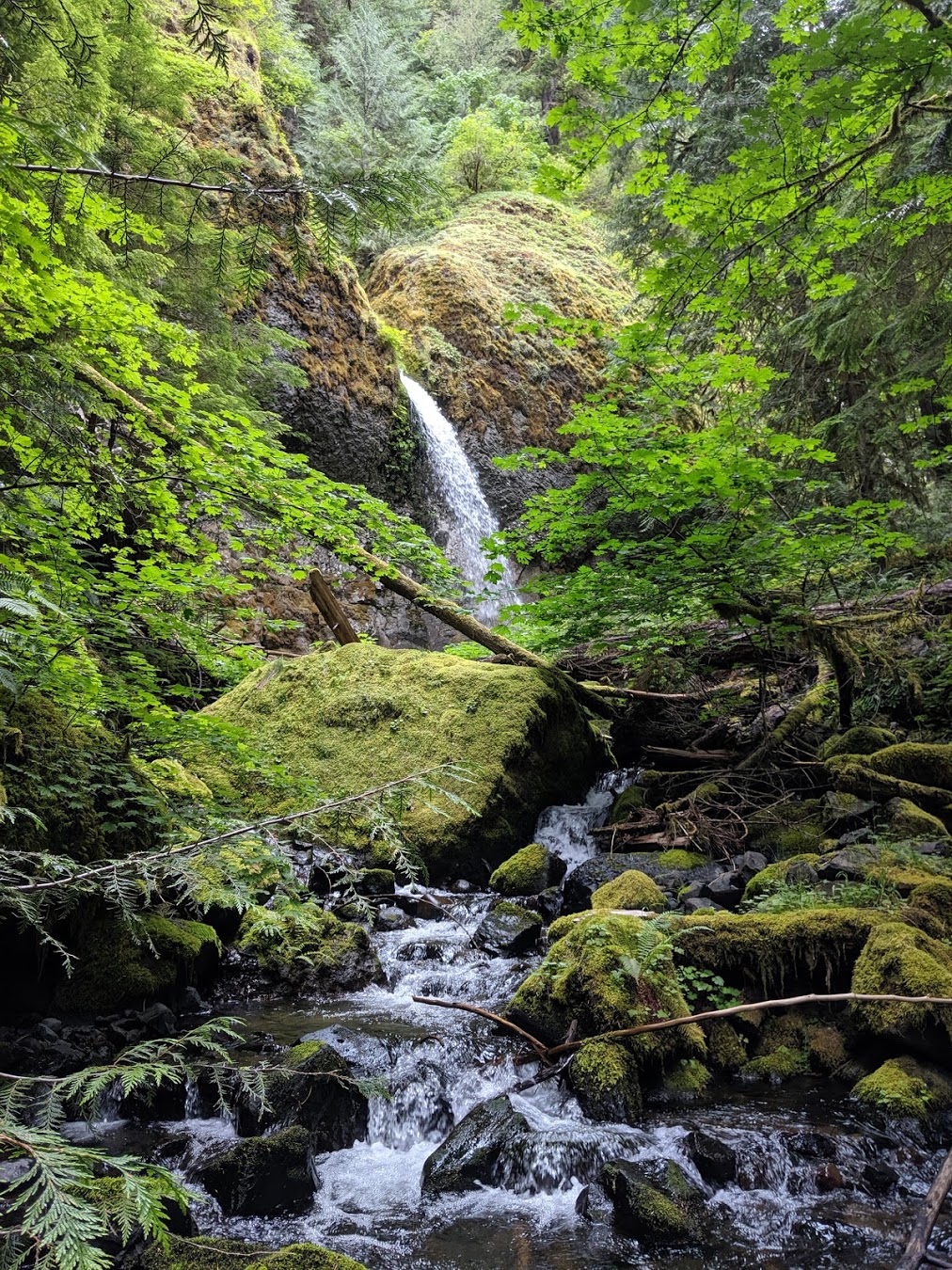 If I were to name this waterfall after a whale, I would name it Narwhal Falls because it reminds me of the horn of narwhal. On the other hand, the fall has a fishtail shape at the top, so it could look like any kind of whale handing down the cliff. 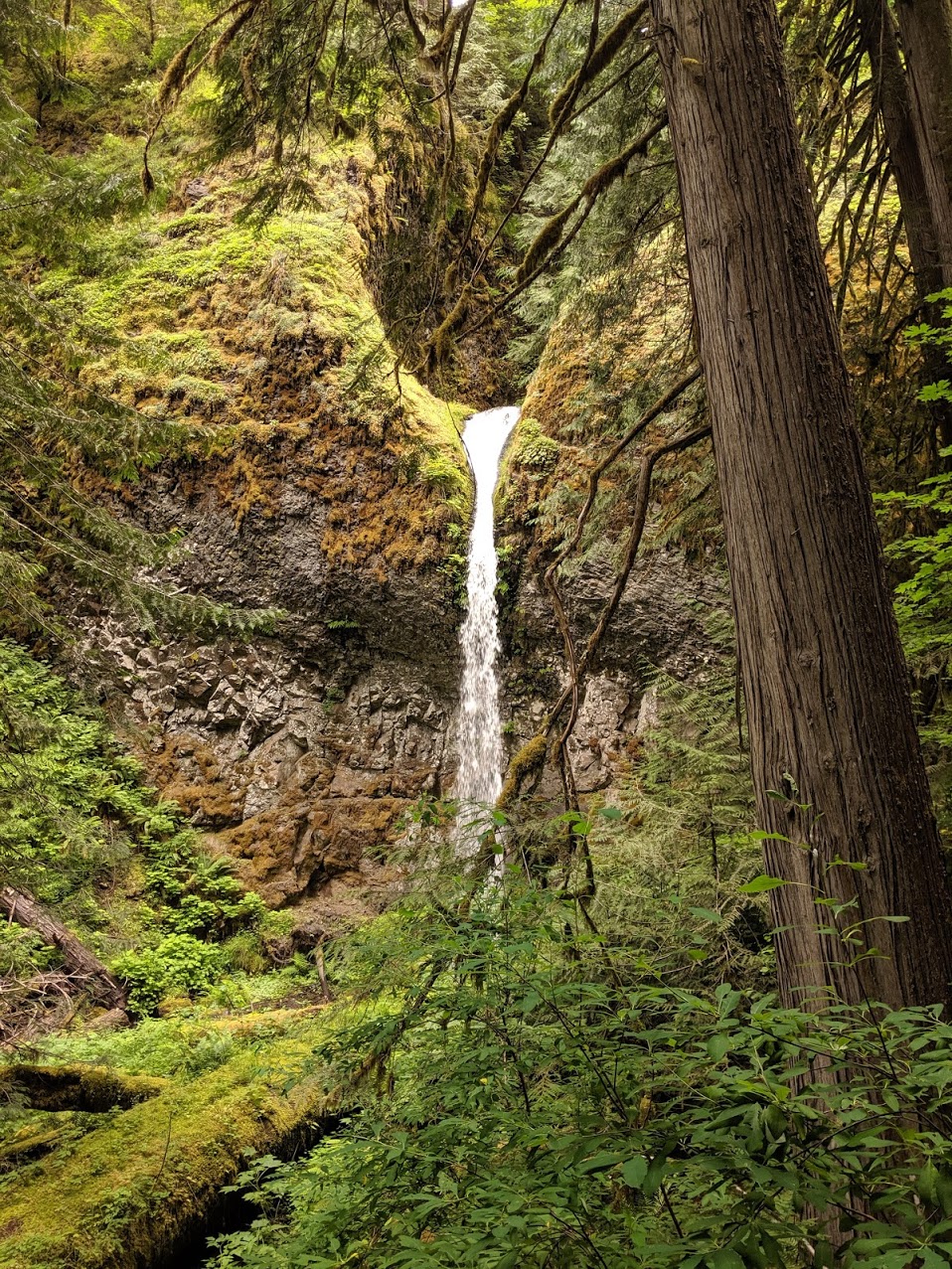 It was really easy to get above this waterfall. There was a relatively clear path up the cliff on the right (direction will be based on as if you are facing upstream). Once I was up the cliff, the bush thickened for a little bit then cleared up on the descend back down to the creek. A bit more upstream, I encountered the second waterfall. If I were to name this waterfall after a whale, I would maybe say Beluga whale because it also has a rounded head. 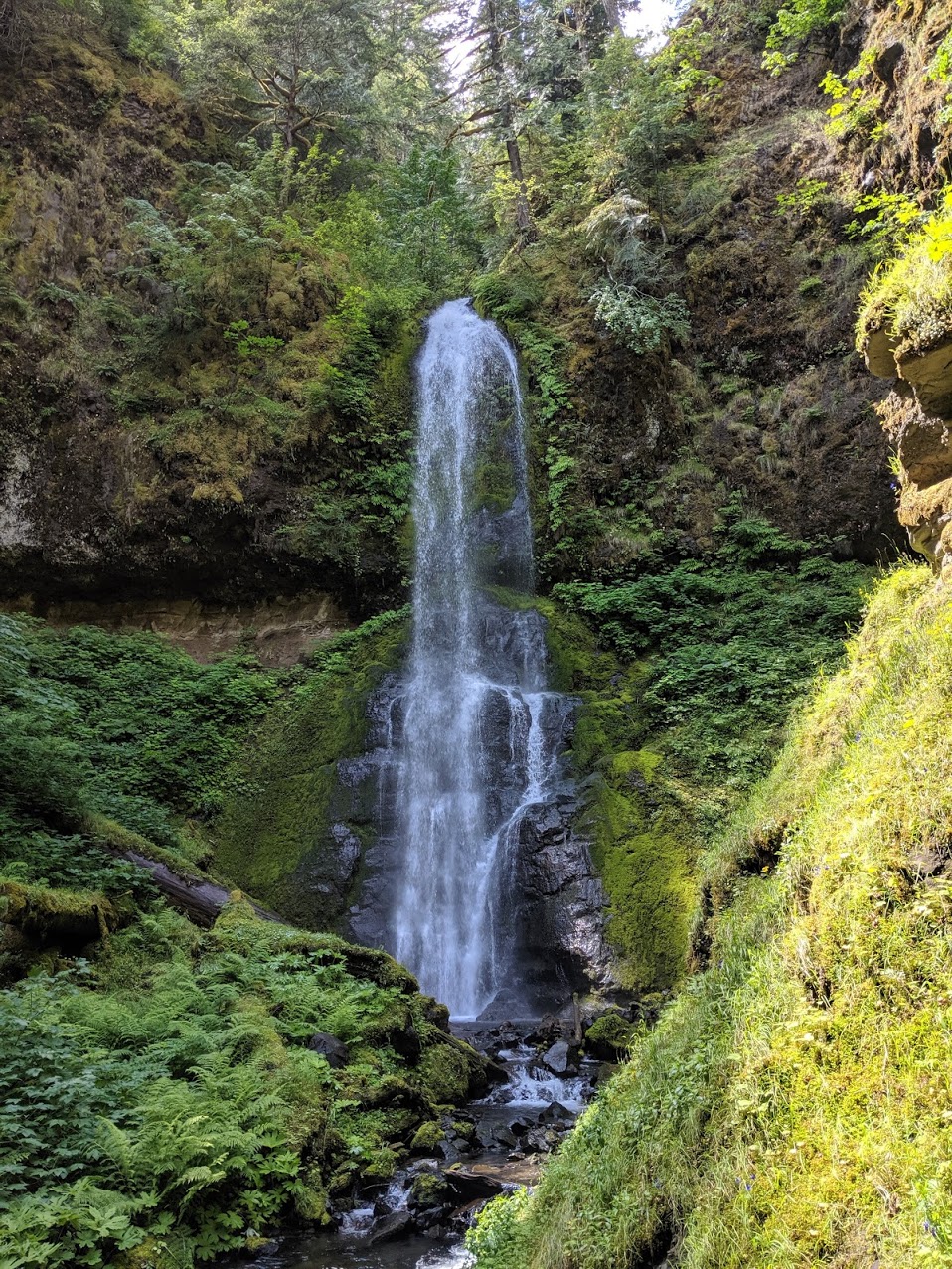 I got up this one from the left: 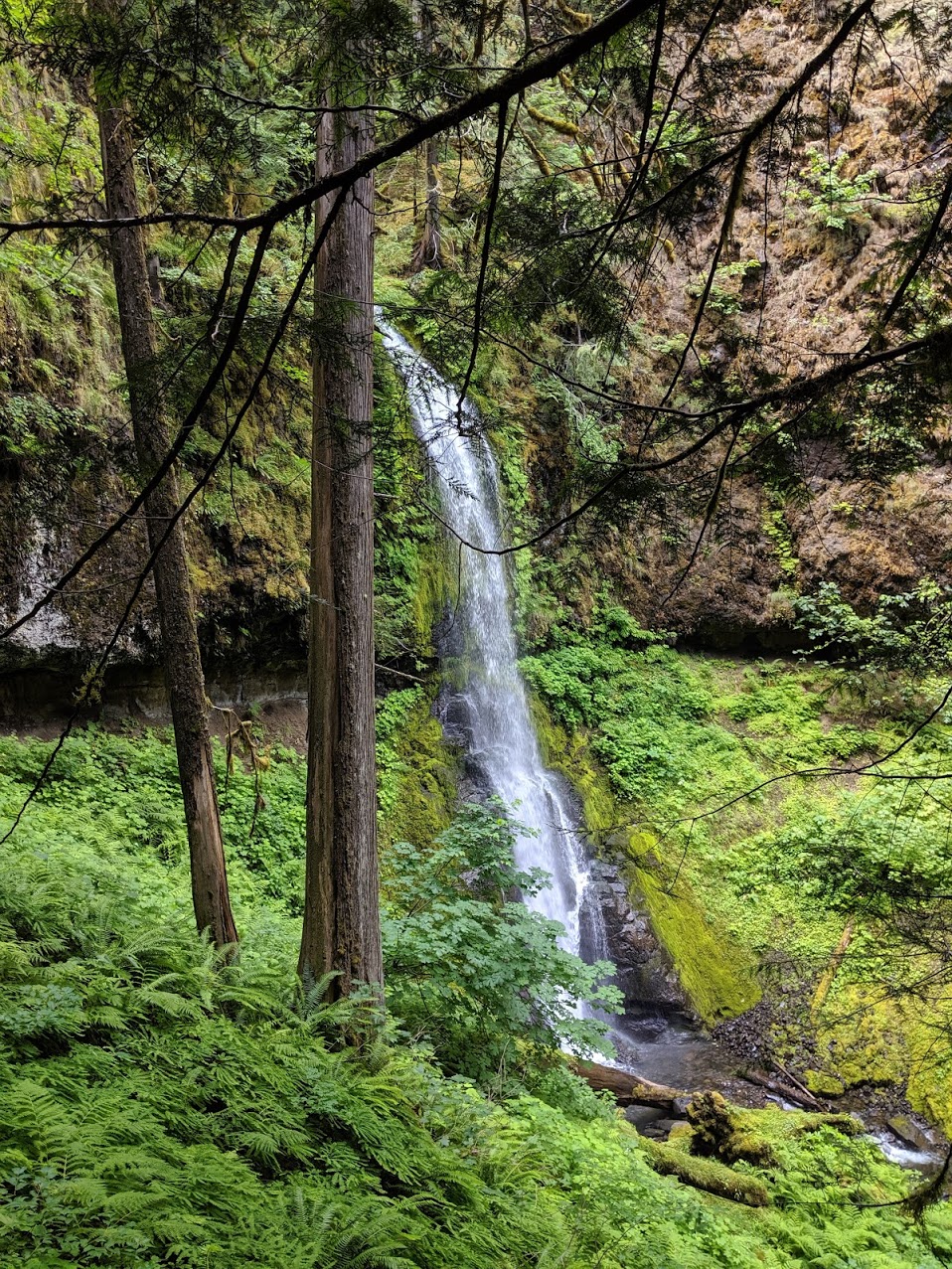 Ascending this waterfall was more difficult than ascending the first. There were fallen logs on the left that provided a good way up. I took a bit of a more challenging/fun way involving some climbing because it was early in the day and I was full of energy. Last section up was a slippery mossy field that was on a pretty steep slope. 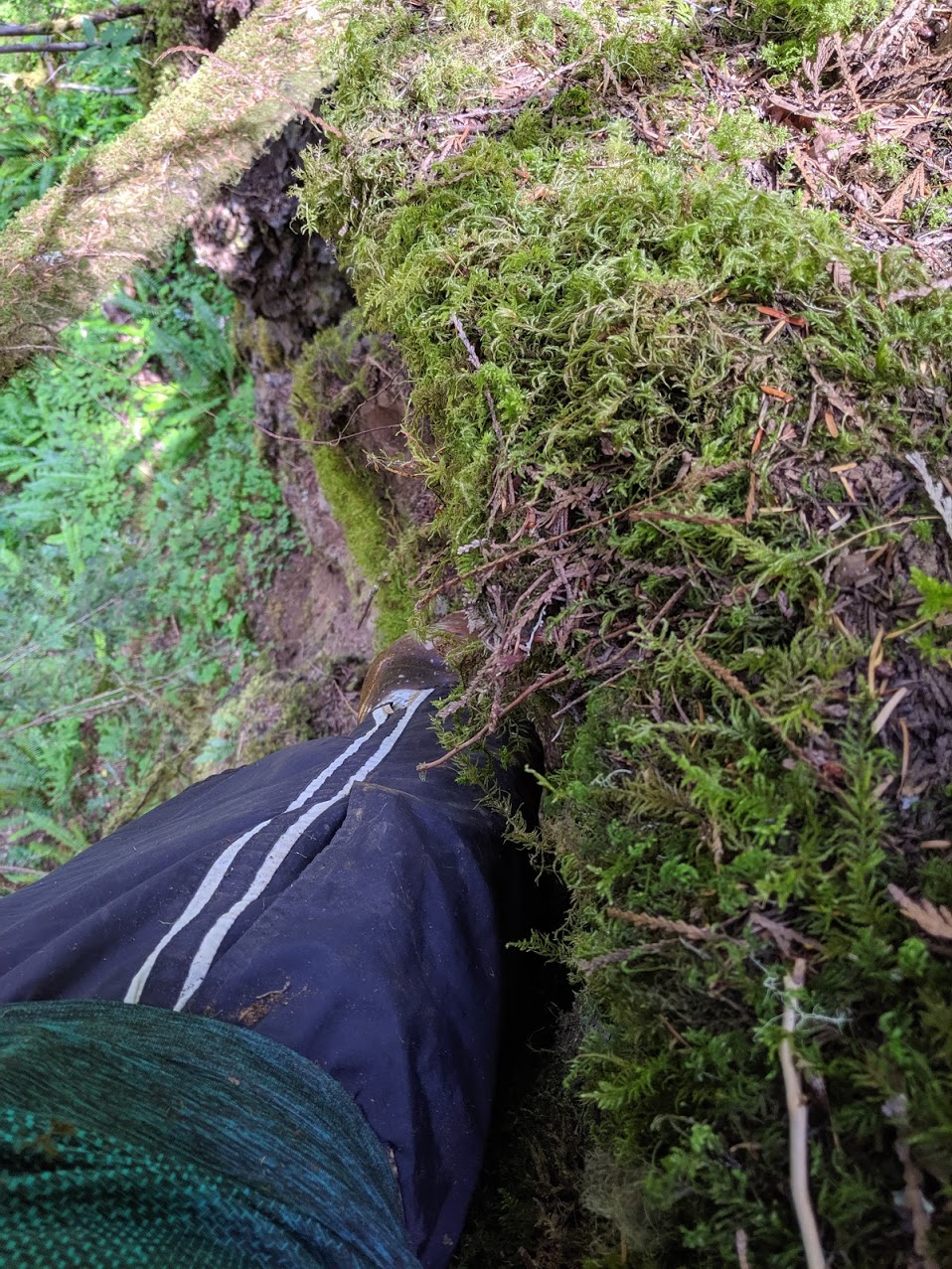 I thought this was somewhat funny. At one point, water started dripping out of my water bladder. It turned out that the tree branches had caught its mouth piece: 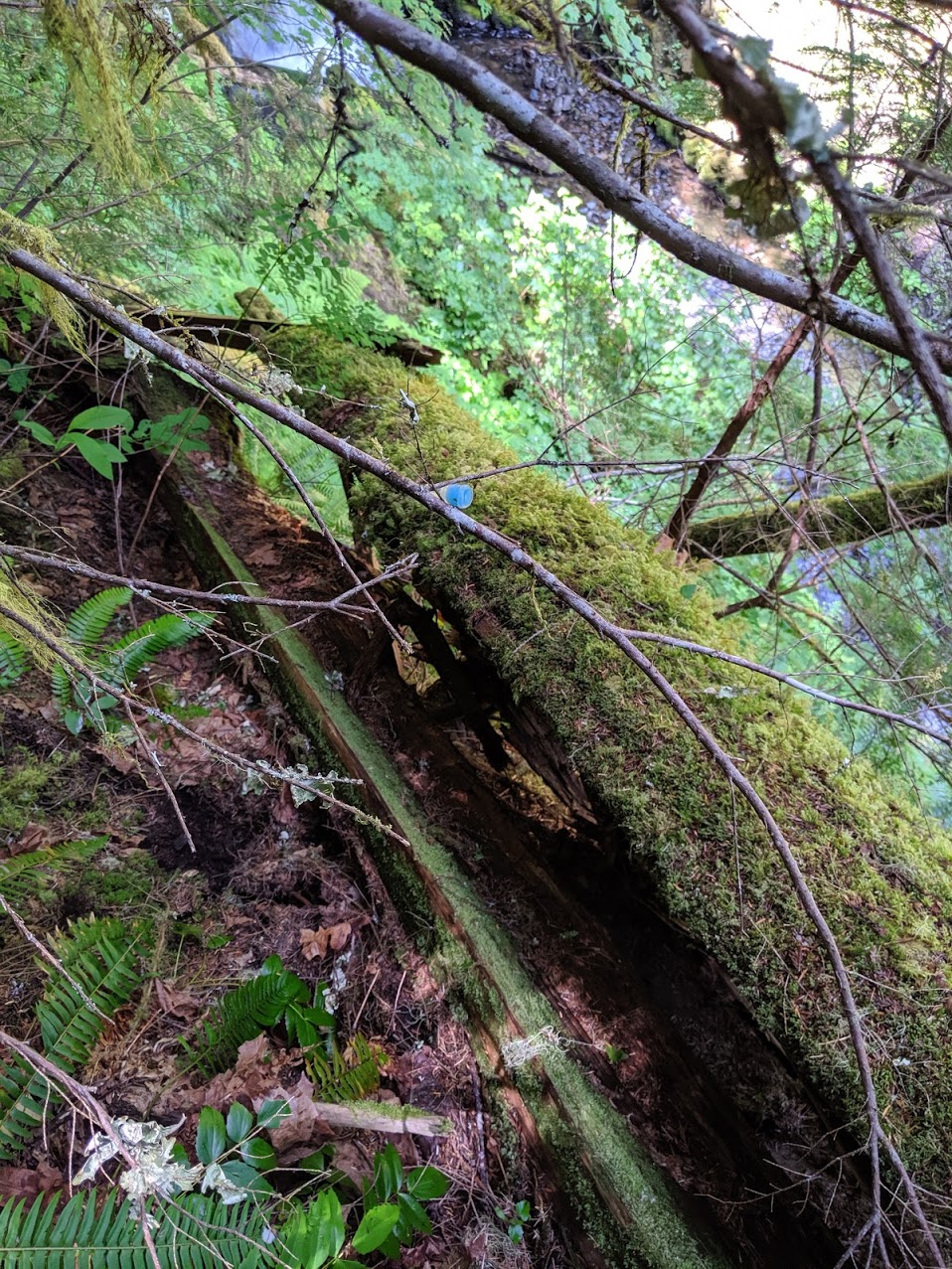 I just love this Jurassic vibe of the clackamas river area: 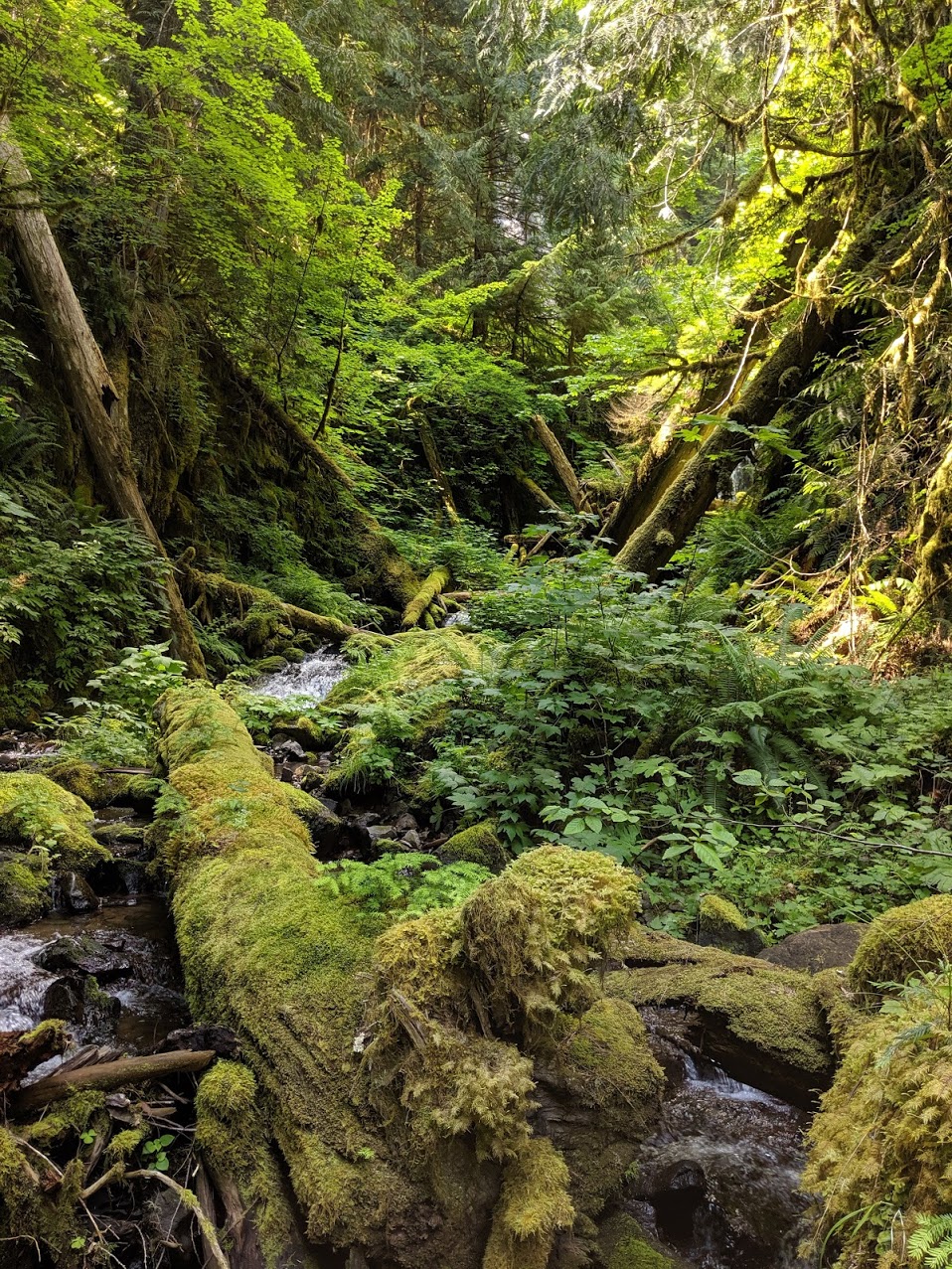 I got cool shot of the third waterfall from the distance behind a field of thorny bushes. That dip looked like a promising way to get up. 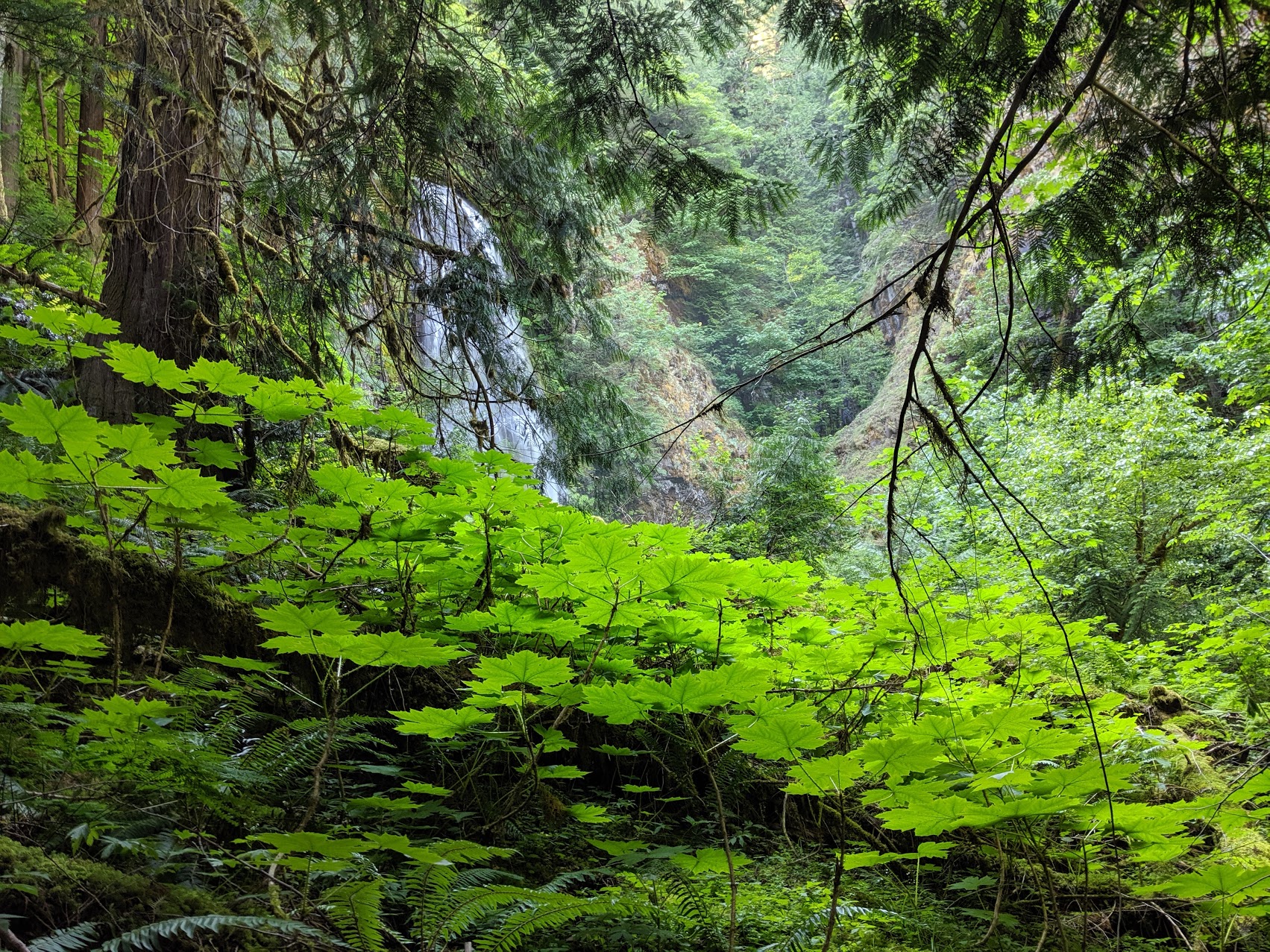 An up close shot of the third waterfall. If I were to name it after a whale, I might name it killer whale simply because it was a killer to get above it. 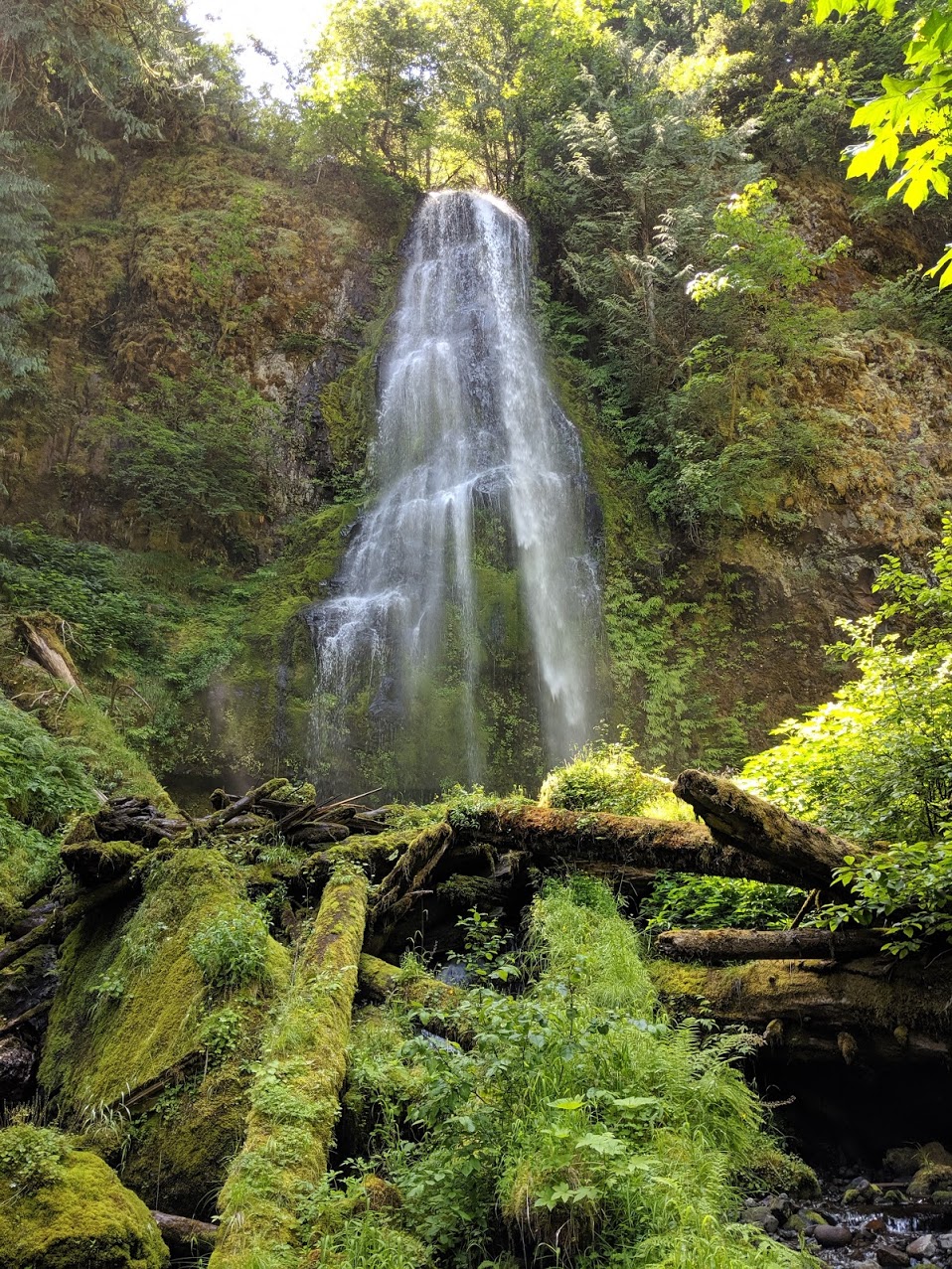 Climbing up this waterfall from the side was incredibly difficult. There was a tiny 6-tier waterfall coming down the dip on the right. The waterfall looked climbable. I tried that, but one of the tiers was slippery with moving rocks. I was half way up when I figured it was too dangerous and came down. However, on the right of the tiny waterfall, there was a steep slope up, with a almost vertical chute section towards the end where I topped over. I took a photo of the waterfall on my way up. 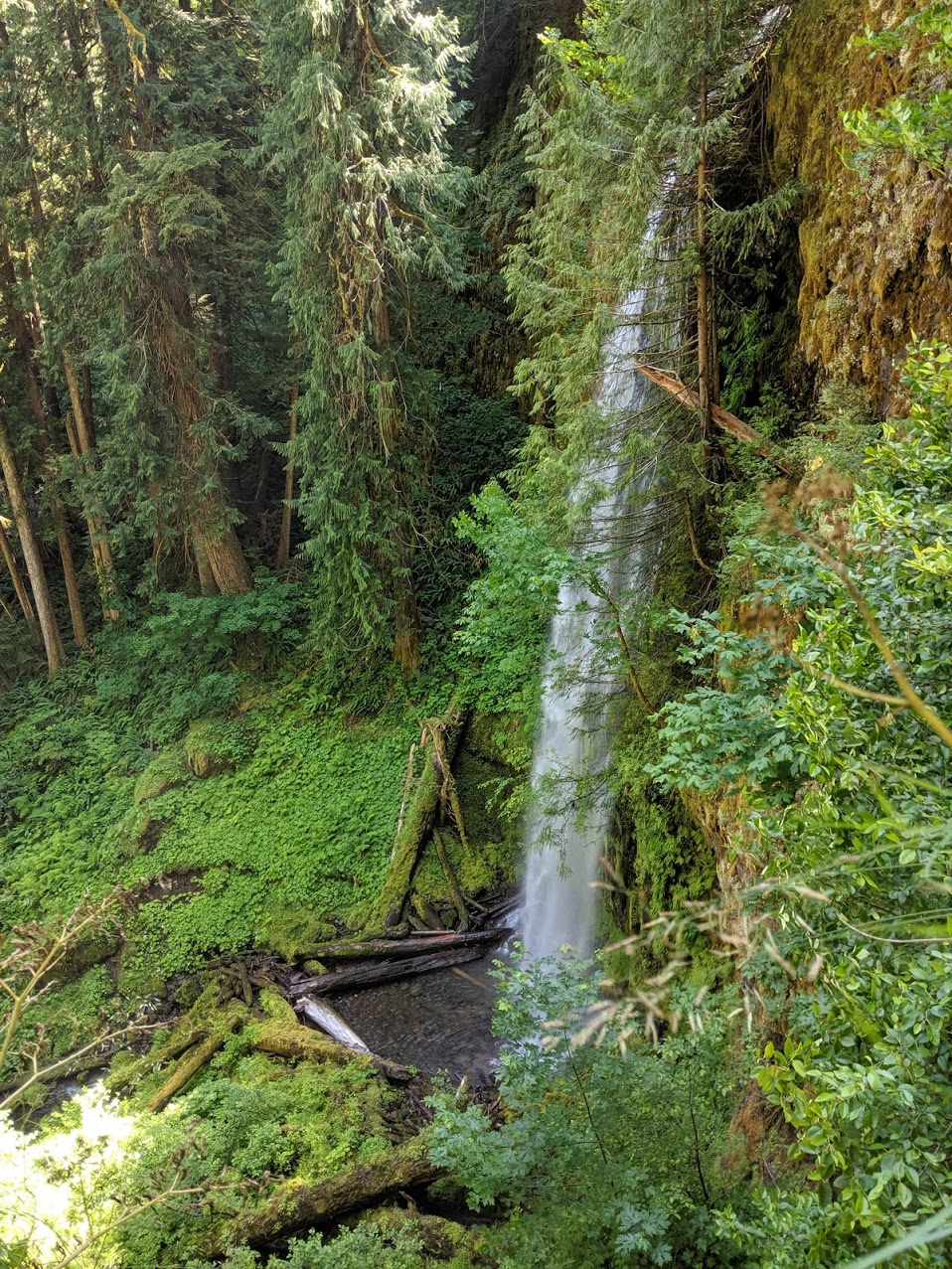 I was getting pretty tired after that, and it was almost 3pm by then, but the beast of a waterfall awaited not far upstream. I was stunned when I finally stumbled onto this incredible waterfall. 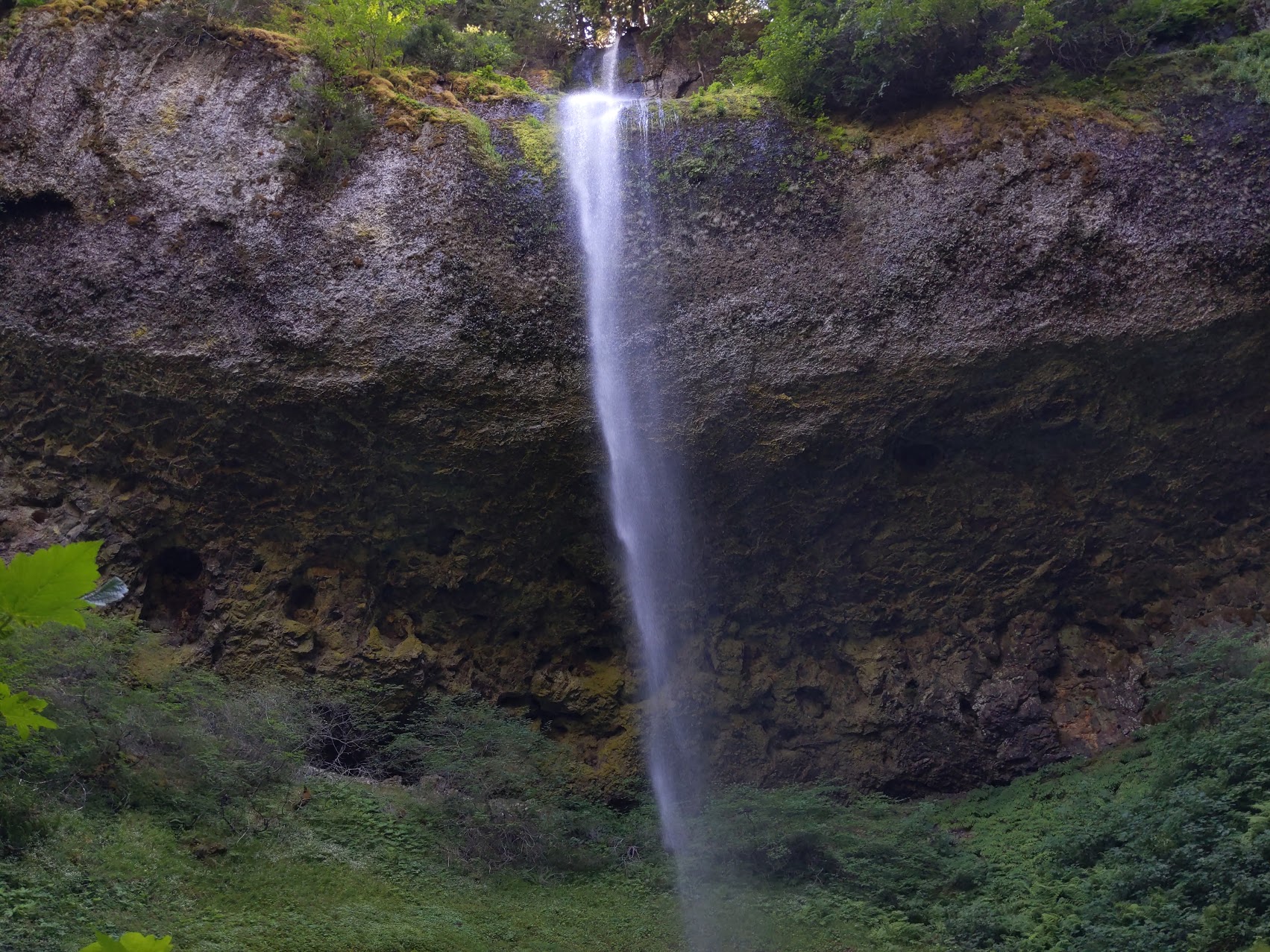 I didn't have a banana for scale, so I stood next to the waterfall to show how huge this waterfall is. I am so tiny in this picture. 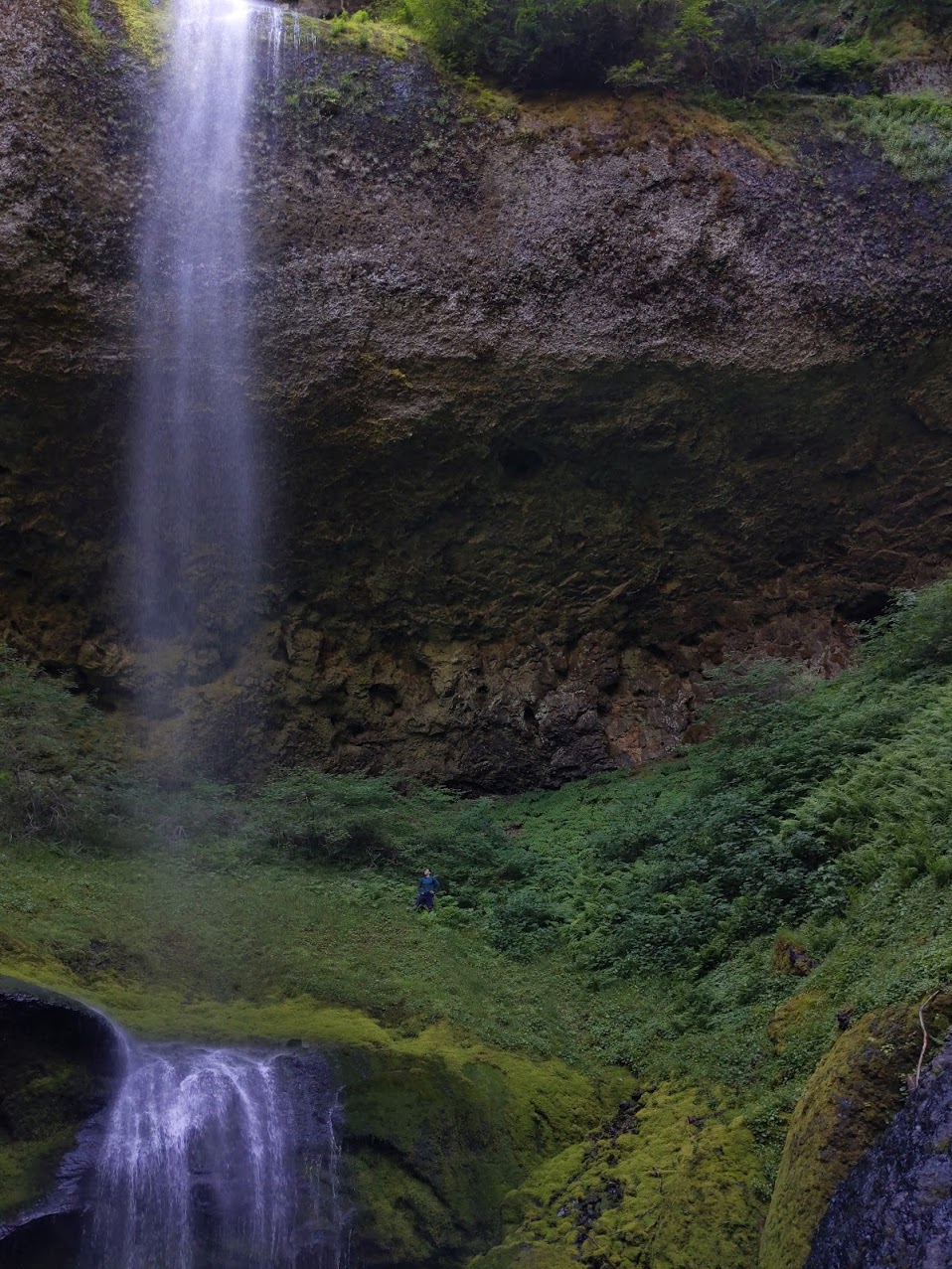 I thought about taking an alternative route out, at least a different way down the third waterfall, but it was getting late. I didn't have a light with me and didn't want to risk getting lost in the dark. The way down was just as difficult as I expected. Here's a photo of me about to get down the chute. 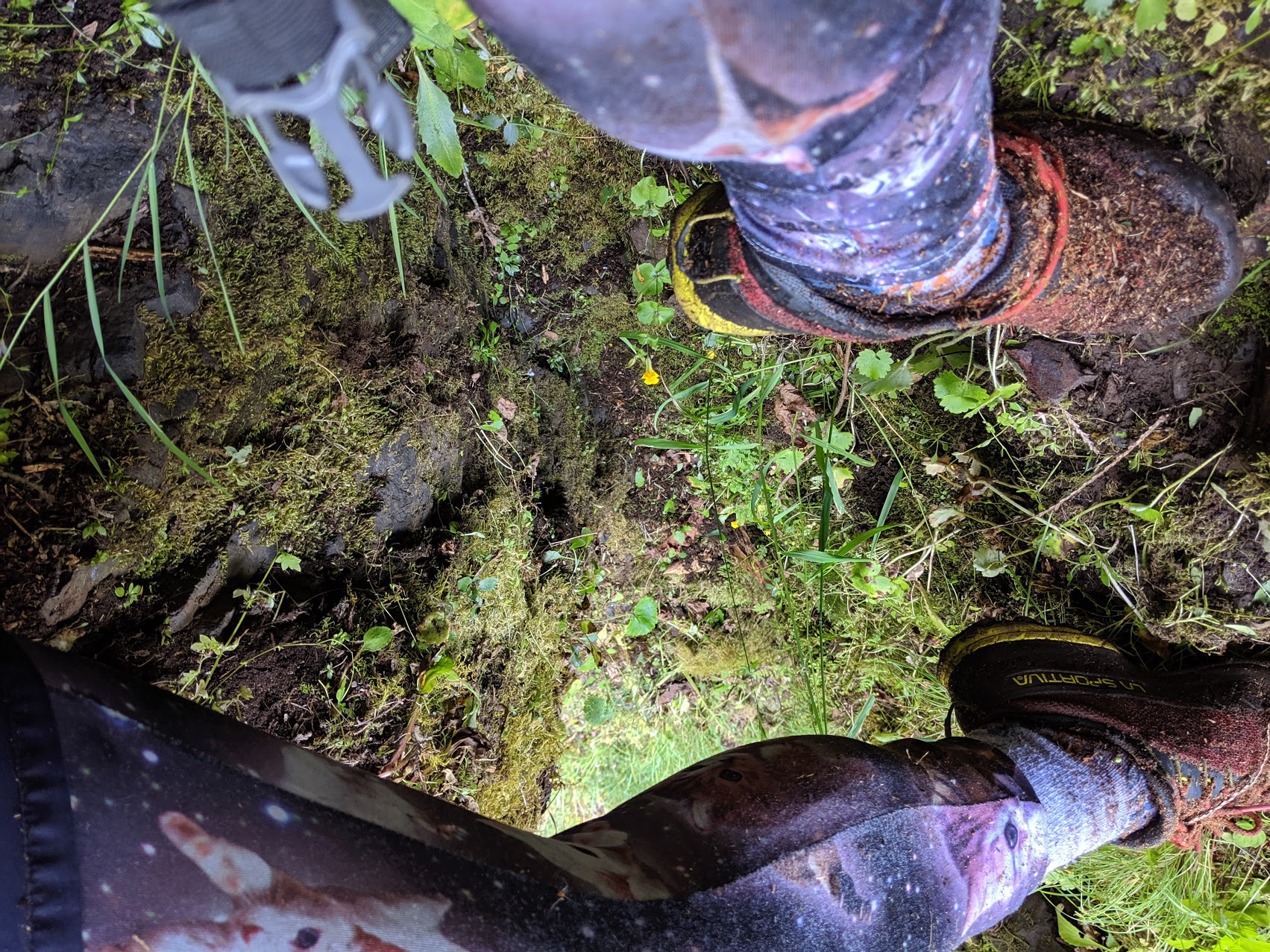 If I were to do this again, I think I'd bring my ropes and gears. It might make it more difficult for me to get up the third waterfall because I might not fit through the chute with a much bigger pack, but coming down would be a lot easier. I spotted riggings set up at the top of all three lower falls from people kloofing down this creek.
Top

Brian Edwards is a good muse to follow if you're looking for hiking inspiration. I've had a lot of fun following him, including my first use of rope and ice axe on a non-alpine route.
Top
Post Reply
2 posts • Page 1 of 1